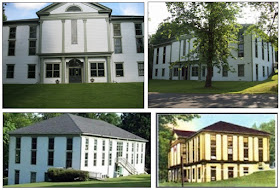 Seated 1,000; Fire Marshall allows: 275
End of Season Concert
Meetings, and Heavy Use by the
Silver Lake Experience 2022
1 of 6 Buildings used for Workshops
Biennial -- Every Two Years for 3 Days


Buildings No Longer with Us

The Auditorium, pictured below, and often called The Amphitheater, was the first of three buildings hurried into construction for the purpose of accommodating the new Chautauqua style teaching and curriculum emphasis begun in earnest in 1887. The Auditorium was located in Auditorium Park, later named Bishop Burt Park, centered on and opposite of Ames Avenue which became the central walkway between the three main [Chautauqua] Assembly buildings, all built within a four year span (1888-1892). 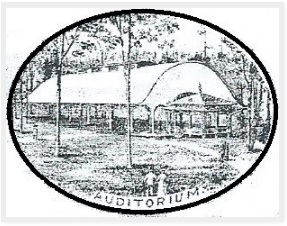 The auditorium had an arched roof 32’ high and was 80’ by 120’ in size. It cost $2,000. Part of the excitement for the new amphitheater/auditorium was because the design was being hailed as the latest available for auditoriums that highlighted an unobstructed view because there were no central support posts needed. A new, local company also brought excitement because they were eager to build and complete building on schedule.

John Talcott Wells Sr. (1843-1931) of Wheatland was awarded patent number 401,870 on April 23, 1880 for his arched truss design. His firm was responsible for building nearly 200 barns in New York State, Ohio, Pennsylvania and Canada as well as auditoriums at Silver Lake, and at Prohibition Park on Staten Island. The amphitheater plans were more rounded at the tops of the arches rather than the pointed Gothic style Wells used for the barns. The auditorium was completed with time to spare before the opening of the season in 1888. It was a time of great excitement and anticipation.


Used by Permission from the Silver Lake Blog: 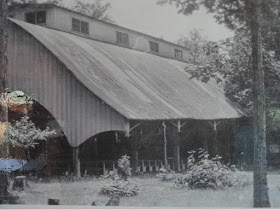 Three-quarters of the auditorium, also known as amphitheater, is shown above, with the first quarter mostly out of the picture to the right. It consisted of a section which was much more enclosed than the open air section of the main seating area. The outer edges of the rows of pews can be seen from the outside.

Just a few weeks back, some old historical narratives were recently discovered in the Cornelia A Greene Library on Main St., in Castile by SLI resident Fred Schuknecht. Most were seen in local newspaper articles from 1911. They were reporting on the massively sized programs that were presented during the years surrounding 1910 at the then-Silver Lake Assembly, now since 1920, Silver Lake Institute (SLI).

The programs had just recently been revived following the devastating results of the so-called "Cleveland Depression" on the Silver Lake Assembly. The Assembly had nearly gone bankrupt during the downturn in the economy which began for the Assembly in the last few years of the 1890s and extended five or more years into the 1900s. Around 1906, Rev. Stoody used his own funds to purchase the properties which had gone into foreclosure and lent them back to the Assembly to resell. He was determined to get the Assembly back on its feet and re-establish its programming as quickly as possible. This he did with the help of many others.

Even though his efforts were less than three or four years old, they produced absolutely amazing results. The old Assembly Auditorium, located in what is now Bishop Burt Park, used to be filled with around 2,000 guests plus choirs as large as 500. Following the revival brought about by Rev. Stoody and some dynamic advertising, the old Assembly Auditorium was now drawing 3,000 guests in addition to the 500 member choirs. Can you imagine setting up 1,000 extra chairs? As long as it wasn't raining, the task of extra chairs worked well on the sides and back of the auditorium. 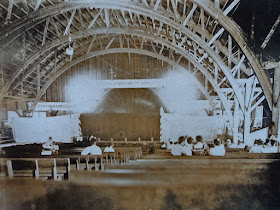 Early arrivals get an early look at the program set-up before it begins. A worker can be seen still making adjustments to the printed sign on the distant left hand side of the front. Those early electrical lights, which replaced the kerosene lamps, appear to be far more effective than some of the lighting we continue to use today. 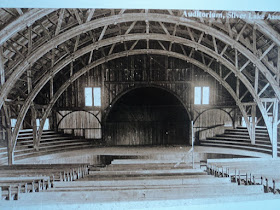 Natural light was important during the days before the electric had been extended onto the Assembly grounds. More light came through the center roof windows (see photo #1 above). The front windows were eliminated when the enclosed front section was expanded, more than double in size. It is not certain whether that was done before or after electricity was extended to the auditorium.

The 1918 arson of the auditorium was a terrible loss from which the Assembly never recovered. The programming of the 1920s, though still vigorous and very well attended, had to adjust to the smaller facilities of Epworth Hall for their main gatherings. Luckily, the Sunday School Association's needs were somewhat different and a very large auditorium was not essential. Back then, many of the cottages within the grounds were utilized for guests attending the special summer events.

The Assembly was officially renamed Institute within two years of the fire, since the facilities no longer accommodated the Chautauqua style. Fortunately, the Epworth Inn (formerly the Hall of Philosophy) had been returned to the Assembly shortly after the Auditorium fire. Hoag Memorial and the W.C.T.U. building, later renamed Stoody Chapel, then Stoody Memorial, were also still available to the Institute following the dramatic fire. Two young boys, 8 and 10, from one of the rentals on the grounds were found to be responsible for the fire. We were still a gated community at that point.
SPECIAL EVENT
A special 100th Anniversary Event "remembering" the Loss of the Auditorium is being planned for a Sunday morning during the 2018 Season on the exact location of the old auditorium in Burt Park opposite Ames Avenue. We are hoping to spend about two (2) hours in early 1900 period clothing for the worship service and then for a time of refreshments and fellowship, all of which are open to the public beginning at 10:30 am. Watch for the date this Spring (2018).

The Hall of Philosophy, pictured on the left and below, was the second building hurried into construction for the purpose of accommodating the new Chautauqua style teaching and curriculum emphasis. Construction was completed in time for the 1889 Chautauqua Assembly Season. The Hall of Philosophy was part of the next five great years followed by three good years of a reduced program. Then in 1897, the younger Mr. Chapman found it necessary to foreclose on the Hall of Philosophy's mortgage, ending the first few valiant years for this somewhat majestic-appearing building.

"Admission to the Assembly grounds was through a gated fence and by payment of a daily or seasonal fee.

"Unfortunately, the rapid expansion of the Assembly proceeded to a point where its expenditures considerably exceeded its means. A national depression in the mid-1890’s exacerbated the problems. Not only was the classroom Hall of Philosophy foreclosed upon in 1897 but Assembly programming itself had to be suspended by 1902. Eventually the Assembly grounds were foreclosed on as well. Rev. John H. Stoody rescued the Silver Lake Assembly in 1905 by personally purchasing its mortgage and its debts. He arranged easy terms for the Assembly’s redemption and saw to the resumption of its programs in 1908.

In 1905, the Hall of Philosophy was bought by a doctor who transformed it into a sanitarium. This failed and in 1912 a hotel company operated it as a summer hotel. When this failed, a group of businessmen in Perry bought the property for use as a Military and Naval School. This prospered for a few years, and after being vacant for a while, a group of persons related to the Genesee Conference bought it and saved it for the Conference. The Assembly got it back in time for the 1919 Season, which was the first season following the fall fire at the Auditorium. 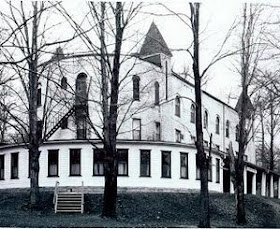 Epworth Inn as it looked in its heyday. 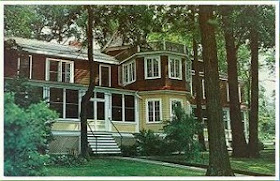 This magnificent structure which was constructed on land directly in front of Silver Lake had a sidewalk running in the front down to the Lake and a sidewalk in the back running straight to Lakeside Avenue. Even in its declining 100+ years, parts of its original majesty could still be identified. Access to the Silver Lake Railroad was in its vast front yard.

Sutton Manor, part of the extensive Sutton Estate, was owned by Mr. Edward Sutton, founder of the Fro-Joy Ice Cream Company of Buffalo which eventually was sold to General Foods. The Manor was a three-story structure with 20 rooms, a ballroom and 32 beds, right on the lake. In order to expand, the Silver Lake Institute Trustees purchased the Manor and adjacent Sutton estate in 1944. The Sutton Manor's name was changed to The Methodist Manor and was used to house the Institute faculty, students, and paying guests.
In later years, as part of Asbury Camp, the Methodist Manor was used extensively in housing children and youth for those age-related camps in addition to United Methodist Church training and fellowship events. The United Methodist Church of Orchard Park used the Methodist Manor for over 40 years during the last week of June as one of three Asbury Camp buildings for its church camp. They continue to this day using the replacement building known as Asbury Manor located on the opposite side of Lakeside Avenue.

Had the Methodist Manor received its due care, it may still have been standing today, but who can really say with its foundation of wood. Having been built around, and possibly before, the turn of the century, the old Manor was torn down in 2006 for safety concerns. Its replacement, the Asbury Manor, was built across Lakeside Ave. on higher ground, conveniently level with the upper entrance to the Koinonia Inn.