Soccer: The Ones to Watch For
With the fall sports season quickly approaching, we’ve already taken a look at some football and girls soccer players to watch and now it’s time to head to the boys’ soccer side. 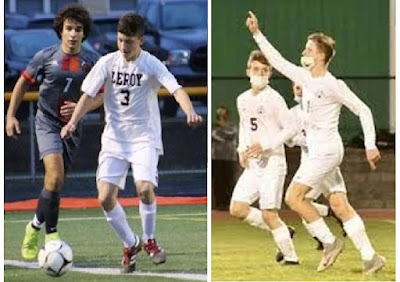 Keshequa was the only local sectional winner last season but that doesn’t mean that there wasn’t plenty of talent spread around. Kendall fell to the Indians in the Class C2 title game, while both Wheatland-Chili and Avon lost in their respective sectional semifinals. Meanwhile, the Wildcats picked up the Genesee Region League title in a tight race with Kendall and Attica.

This season will see a lot of change, possibly more than normal, as plenty of stellar athletes were lost to graduation. However, there is still an abundance of talent returning to the pitch in 2022.

Here is a look at some players to watch in the upcoming boys soccer season:

(Players are listed as just a sampling of the talent that can be seen this fall.)

TERRANCE BAYLY-HENSHAW, Wheatland-Chili — Senior, Goalkeeper — A first-time Genesee Region League all-star as a junior, Bayly-Henshaw finished the season with eight shutouts and 85 saves for the Wildcats, who finished at 14-4. Wheatland-Chili edged Kendall and Attica for the Genesee Region League title last season and advanced to the Class D1 semifinals, while the Wildcats should have plenty returning this season to make a run at league and sectional titles yet again.
REECE GRISEWOOD, Letchworth/Warsaw — Senior, midfielder — Grisewood enters his final season for the United and will be the team’s leading returning scorer this season after he finished with seven goals and five assists as a junior. Letchworth/Warsaw finished at 7-10-1 last season but lost eight seniors to graduation, including leading scorer Nik Eustace, who finished with 11 goals and seven assists.

OWEN HALPIN, Batavia — Junior, midfielder — The Blue Devils had one of their best seasons in recent memory in 2021 as they finished at 9-6-2 and earned the No. 4 seed in the Class B1 tournament. Halpin will be the team’s leading returning scorer this fall after he finished with seven goals and eight assists last season. Batavia will have plenty of talent to replace, so Halpin will be key in continuing the program’s upward trend.

LEE HARTKE, Avon — Senior, midfielder — One of the top scorers in the Livingston Conference last season, Hartke finished with 20 goals to go with a pair of assists as a junior. The Braves lost just two seniors from a squad that advanced to the Class C1 semifinals and return this fall with a plethora of athleticism that should have them primed for another run.

IAN HINRICH, Keshequa — Sophomore, attacker — One of the youngest returning stars this season, still just a sophomore Hinrich finished with 16 goals and five assists as a freshman. The Indians were outstanding last fall, going 18-2-1 and beating upstart Kendall for the Class C2 title. However, Keshequa lost more talent to graduation than anyone with 12 seniors gone, including one of the top scorers in Section V in Reece Powers.
SIMON LAMPARELLI, Attica — Senior, Striker — A two-time league all-star, Lamparelli was outstanding as a junior as he was named the 2021 Genesee Region League Player of the Year. Last fall he led the league by far with 34 goals to go with an assist, while his 34 goals were second in all of Section V. Attica finished at 11-6 overall and 7-3 in the GR, good enough for third behind just W-C and Kendall.

COLIN MARTIN, Byron-Bergen/Elba — Junior, Midfielder — As a first-time GR all-star as a sophomore, Martin had a solid sophomore campaign. Martin led the team with 11 goals and 11 assists. Byron-Bergen was 4-6 in a tough league, while the Bees were 8-10 overall. However, B-B/E has virtually all of its scoring returning as well as all of its goalkeepers this fall.

MAVERIC MCKENZIE, Le Roy — Senior, midfielder — The spark for the Oatkan Knights offense last fall, McKenzie led the team with 16 goals, while he was second with five assists. Le Roy, though, might be in rebuilding mode after it lost 12 talented seniors to graduation, which amounts to 24 of its goals and 24 assists from last season. Le Roy was a solid 9-8 last fall, including 5-7 in a difficult LCAA.

JAMES NOLAN, Wheatland-Chili — Junior, midfielder — Another of the returning stars for the Wildcats, Nolan picked up his first GR all-star selection last season. Nolan finished second on the team with nine goals and eight assists. W-C won the GR title with a 9-1 league mark and was 14-4 overall, with a trip to the Class D1 semifinals.

TOBEY PASSER, Kendall — Senior, Defender — Defensive specialist earned his first Genesee Region League all-star selection last fall. Passer finished the season with one assist, but his strength was that he aided a defense that had five shutouts on the year. Kendall finished at 10-8-1 overall and was second in the GR with a 7-2-1 mark, just behind W-C; the Eagles came from the No. 6 seed to advance to the Class C2 title game.

NATHAN THAYER, Keshequa — Senior, midfielder — The second of two important players returning from the reigning Class C2 championship team, Thayer was second on the team with 17 goals last season, while he was third on the team with 11 assists. Along with the aforementioned Hinrich, Thayer will play a big pat for a roster that lost 12 seniors from a 18-2-1 team - including Reese Powers (26G, 34A) and Avery Strobel (11G, 12A).

KYAN TIEDE, Pavilion/York — Junior, midfielder – Quietly was one of the top players in the LCAA last fall when he led the team with 18 goals to go along with six assists. Pavilion/York had a solid 2021 as they finished 11-7 overall and 8-4 in the tough LCAA. However, P/Y lost eight seniors to graduation, including second leading scorer Jackson Feltham (17G, 6A), so Tiede will be looked upon to step his game up to the next level this season.