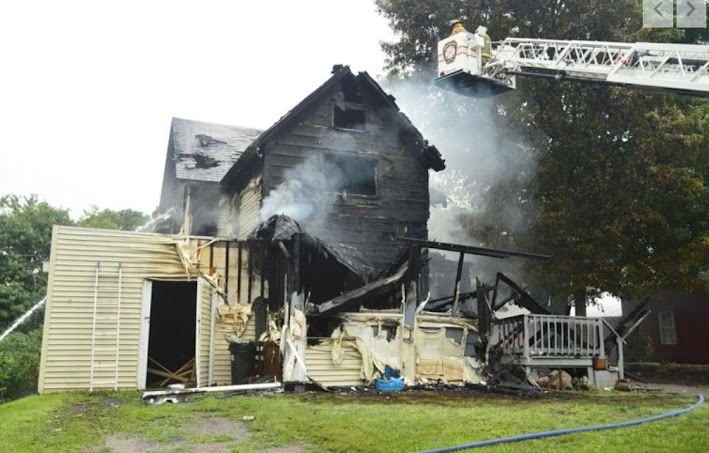 Photo by Mark Gutman of the Daily News - Perry Fire Dept. personnel respond to the morning fire.
Three people had to be rescued from a roof Tuesday morning after a fire started at a Maple Street home, Wyoming County Emergency Services reported. Several fire departments responded to a house fire called in at 6:49 a.m. Tuesday at 18 Maple St. The two-story residence, owned by Kyle Burger, was destroyed.

“Two adults and a baby had to exit the home through a second-floor bedroom window onto a porch roof. A neighbor assisted the individuals with a ladder in removing them from the roof to the ground,” county Emergency Services said.

The Red Cross is assisting the family. No injuries were reported. The cause of the fire is under investigation, the county said this morning.

The fire departments responding to the scene were Silver Springs, Castile, Gainesville, Perry, Perry Center, Warsaw, Wyoming, Pike, Nunda and Wyoming Correctional. Responders were at the scene for about four hours.