The fair opened Saturday with all the attractions fairgoers have come to expect. Vehicles and trailers arrived so area 4-H’ers and their parents could unload the cows, swine, sheep and goats for the week’s contests and displays.

People then flocked to the midway for the rides, the food, and the vendor displays that have long made the fair a favorite. Plus the displays and demonstrations which can include everything from prize vegetables and elementary school art, to antiques evoking an earlier era of life and farming.

As for Monday? Last years’ fair queen Kasey Krenzer, 18, of Bliss leads her cow Bruce out of a stall before one of the fair’s many contests. Ashton Wilcox, 13, of Varysburg relaxed with his cow Balboa in the fair’s Agricultural Exposition Center, which saw its first use last year, and replaced the fair’s former popular-but-aging cattle barn.

The fair’s grand parade was set for Monday night, along with the crowning of this year’s fair queen and court.

Today’s schedule will include numerous 4-H showmanship and horsemanship contests. The traditional Wyoming County Board of Supervisors meeting is also set for 2 p.m. today in the Youth Building. They’ll be followed by the firemen’s parade this evening, and the 54th annual Meat Animal Auction on Wednesday evening.

The fair runs through Saturday night. 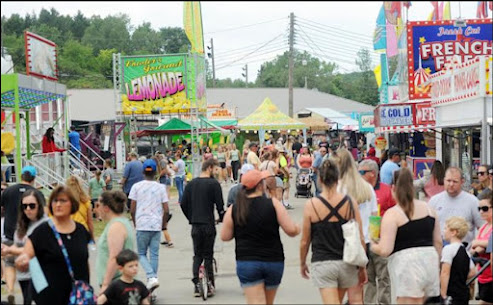 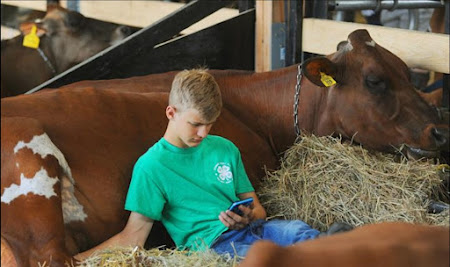 Ashton Wilcox, 13, of Varysburg relaxes with his cow, Balboa on Monday afternoon at the Wyoming County Fair in Pike.
Posted by G.A.F. at 6:41 PM