EF2 TORNADO CONFIRMED IN WYOMING COUNTY— —  Update: Thursday, 3:10 p.m. The National Weather Service has confirmed an EF2 tornado touched down Thursday morning in Wyoming County. Route 78 had to be closed but was expected to reopen by approximately 4:10 p.m., officials said. 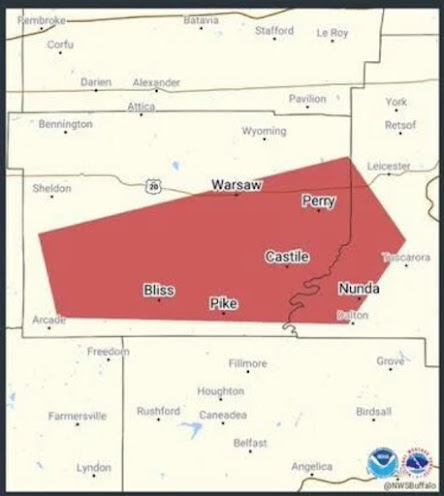 Although Silver Lake did not experience a direct hit, the Silver Lake Institute sustained very heavy rain to the extent that driving was impossible and a bright yellow cottage diagonally across Ames Walkway could not be seen for the wall of silver-white created by the downpour at the fringe of the EF2. No other Silver Lake reports were received.

Interviews by Mark Goodman of The Daily News

The most extensive damage occurred along routes 78 and 362, said Director Brian Meyers of the county’s Fire & Emergency Manage-ment Department. Personnel worked to close additional side roads to allow crews to continue working in the area.

National Grid reported 60 customers without electricity, while New York State Electric & Gas had restored service to most of its customers. No injuries were reported and the American Red Cross assisted.

Initial reports indicated three structures damaged, including at a barn site in North Java. More than a dozen trees were downed, along with power lines.

Following the Tornado, a "Severe Thunderstorm Warning" was issued by NWS. The warning was in effect until noon for Livingston and southeastern Wyoming counties. Gusts of up to 60 mph and hail were possible but not reported.

At 10:36 a.m. a severe thunderstorm capable of producing a tornado was located 9 miles northeast of Arcade, or 16 miles west of Letchworth State Park, moving east at 30 mph, according to the National Weather Service in Buffalo. Radar indicated rotation. Flying debris could be dangerous to those caught without shelter, NWS officials said. Mobile homes could be damaged or destroyed. Damage to roofs, windows, and vehicles could occur. Tree damage is likely. [end of warning]