Ames Walkway Open to Walkers for 10 Weeks:
2022 Summer Season Signs are Up;
Will Remain Up through Labor Day
. 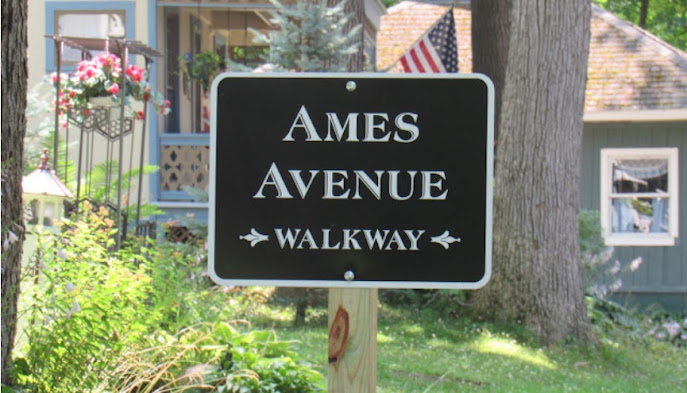 In the very heart of the Institute community is Bishop Burt Park originally named Auditorium Park. The first large building put up on the grounds was the Auditorium (often referred to as the Amphitheater) which was built in the Park opposite Ames Avenue in 1888 and destroyed by fire in 1918. The Ames Avenue location provided for a direct walking path from the main Auditorium to the second large building on the grounds which was the Hall of Philosophy (later named Epworth Inn) built in 1889 and located at the current site of Wilmott Lodge, just south of Chapman Road.
In 1892, the third large building put up on the grounds was Epworth Hall (on the north side of Chapman Road) which was funded by the Epworth League and located on Ames Avenue which had already become the main street for worship and programming. Wesley Ave. was the main street for business and entertainment with a bandstand at the foot of Wesley actually out in the water of Silver Lake and seating was just west of the railroad tracks which were removed in the early 1970s.
Today, the still-new Ames Walkway signs and decorative pillars re-designate and renew Ames Avenue as a walking path from Epworth Hall to Burt Park and Stoody Hall. It remains a walking path from July 1 through the end of Labor Day weekend each year with parking limited to 15 minutes for pickups and drop-offs. After Labor Day, the Walkway shares the unpaved Avenue with residential parking for those not having enough room on their property for their cars until the following July 1, as stated in the SLI handbook under Motor Vehicles.
Posted by G.A.F. at 4:30 PM