A Few Simple Steps can Help Get them Out of Your Home:
Master Gardener:..Bats are beneficial insect predators, all 9 different species 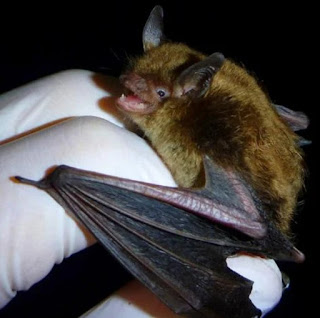 Got bats? You might not think so but bats are good to have around. They play an important role in nature as they spend the night feeding on a variety of insects.

One bat can eat almost 50 percent of its body weight in a night which is upwards of 3,000 insects. In addition to mosquitoes, bats are known to eat stinkbugs, June bugs, leafhoppers, cucumber beetles, tent caterpillar moths, and corn earworm moth.

They live in a variety of habitats, from natural areas like fields, forests, and wetlands, to agricultural areas and cities. They like to feed where insects are swarming — you might see them swooping over your yard or around a streetlight.

Nine species of bats live in New York for some part of the year.

Six are considered to be cave bats as that is where they hibernate in the winter. Three species spend the year living in trees and fly to warmer areas for the winter.

While most of these species roost in locations away from humans, the little brown bat and big brown bat often roost and raise young in buildings. These bats once roosted in hollow trees but have adapted to human structures, partly due to habitat loss.

Humans and bats usually find themselves at odds either when a bat gets into a building or when a bat maternity colony roosts in a building.

You’re most likely to have a bat get into the house in July and August. These are usually young bats that got lost on their way out for the evening.

If you have a bat in the house, don’t chase or swat at it. As the bat looks for a way out, it will circle the room.

If you are sure the bat did not come in contact with anyone, you can follow the procedure below to help it find its way out:

n First get all pets and people out of the room. Lights should be left on.

n Shut all doors leading into other rooms. Open windows — removing the screens — and any doors to the outside. Stand quietly by a wall or door where you can watch the bat leave.

n When trapped inside bats will fly making steep banking turns. They fly upwards when approaching a wall and near the middle of the room they swoop lower. After 10 to 15 minutes the bat should find an opening and fly away.

Make sure that someone sees the bat leave.

If the bat lands on the wall or curtain you can capture it without touching it.

Do not touch a bat with your bare hands. Always wear a pair of heavy leather gloves as bats have very sharp teeth.

If the bat is disoriented and tired, it probably won’t fly as you approach. Use a container big enough to fit over the bat, such as a bowl.

When the bat is resting, place the container over the bat. To trap the bat, slide something flat and rigid such as cardboard between the wall and the container. Firmly hold the cardboard against the container and take it outside.

To safely release the bat, find a spot where you can place the container on its side (face it away from you) on a secure place above the ground.

A tree works well as they can climb to the height they need because bats need to drop from a perch to fly. Do not put a bat on the ground as they will not be able to take off.

If there is a possibility that anyone might have come in contact with the bat or been bitten, do not release the bat. Secure the bat in a container with a lid and contact your local health department for instructions as soon as possible.

The bat will have to be euthanized — without destroying the head — and tested for rabies. The incidence of rabies is very low in wild bat populations, but in situations where it is reasonably probable that contact might have occurred, rabies treatment is usually recommended.

If bats continue to enter your home, inspect it to determine if you are housing a maternity colony.

Do not use poisons to eliminate a bat colony. No chemicals are registered for this purpose.

White-nose syndrome has caused serious declines in bat populations so even the loss of one maternity colony can have a long-term negative impact on the local bat population.

There are several things you can do to bat-proof your home.

Stage a “bat watch” at dusk to look for the exit points as bats leave the building. Common spots include vents with loose screening, the roof peak or where the flashing has pulled away from the roof or siding.

Seal all holes to prevent bats from entering your home. Bats can crawl through a crack as small as 0.5 by 1.25 inches, so persistent bats may find a way back to the roost.

While bat-proofing is relatively simple, you may have to hire someone to reach all the spots.

Bat-proofing should be done either in the spring before they arrive or in the fall after they have left the roost. It should never be done between late May and mid-August because pups stay in the roost until they are old enough to fly.

The young, flightless bats would be trapped inside the building and may enter living areas in search of a way out. Female bats may also attempt to re-enter the building to rejoin their young, even during daylight hours.

Displaced colonies will not relocate into buildings that already house a maternity colony.

A one-way door can be installed if bat-proofing must be done while bats and pups inhabit the building.

One-way doors are placed over a bat entrance to form a tent or long sleeve. They are made from pieces of mesh or screening.

These doors allow bats to exit at night but prevent their re-entry at dawn.

Do not use one-way doors from May to August as young bats will be trapped inside and die.

Bats are beneficial and should be thought of as good neighbors. It is important to maintain wild bat populations to help control insects and to preserve ecosystem health.

Installing a bat box on your property, prior to bats returning in the spring, can provide an alternative site for maternity colonies. Properly constructed and sited bat boxes can provide a suitable place for females to raise their pups and keep them out of your house.