Lack of Access Hampers Efforts to Save 22-year-old Man:

Extreme clutter hampers efforts to save victim from Shelby fire 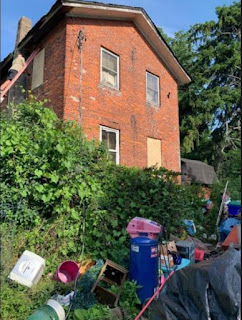 When crews from Shelby Fire Department arrived at 10307 Freeman Rd. Tuesday afternoon they were met with a house full of smoke, three people hanging from a window and clutter.

It was the clutter both outside and in the house that hampered efforts to get inside to save a fourth victim, a 22-year-old man who was later found dead inside the house.

“We got there and there was heavy smoke inside, with people hanging from the windows,” Chief Jason Watts said. “We were able to grab them and get them out and we were told there was a fourth person still inside.”

Both front doors were boarded over, with cabinets and other debris in front. The only other access to the house was in the rear, where “there was clutter so bad we couldn’t get in,” Watts said. “It wasn’t a safe situation for our people,” he said. “We couldn’t have done anything different to change the outcome.”

The fire on Freeman Road was contained to the inside, with heavy smoke and water damage. A contractor spent Wednesday morning boarding over windows to the house, which has been condemned.

Watts said he was thankful for all the help that arrived, especially with the fires in Medina and Lyndonville putting a stress on local volunteers and Medina Fire Department.

“Tough day in Shelby today. First my heart goes out to family for their loss. I can’t imagine losing a family member let alone one of my children. Next I can’t thank everyone enough that assisted at today’s house fire. Even with the conditions we were faced with, everyone did a great job.”

No firefighters were injured. Watts said a cause is under investigation but it may have started in the kitchen.