Across the Street and Down the Road:
Officer Kramell promoted to full time officer at the Perry Police Dept. 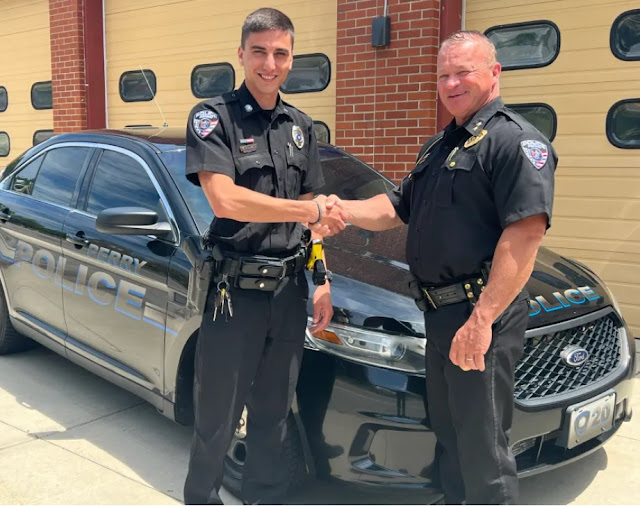 Officer Kramell grew up in Perry, where he currently resides with his wife. He graduated from Perry Central School District in 2014 before attending SUNY Fredonia. There, he received a bachelor’s degree in Psychology with a minor in Criminal Justice. In 2020, Officer Kramell entered the Rural Police Training Academy and was hired in Perry upon graduation in March of 2021.

While working in a part-time capacity, Officer Kramell quickly became an integral part of the Perry Police Department. Officer Kramell’s performance, integrity, work ethic, and dedication to the community is unmatched. “It’s important that when we have the opportunity to hire someone that’s invested in the community, we take advantage of that whenever possible,” said Chief Grover.

Appointing Officer Kramell to a full-time capacity fills an empty spot the Perry Police Department has had on its roster for several years. That void has strained the department in filling shifts amongst its other 4 full-time and 4 part-time officers for quite some time keeping in mind that number includes a full-time Sergeant and School Resource Officer. Officer Kramell’s appointment now puts the department at full-time staffing.

“We’re looking at a time where we’re lucky that we have the right people at the right time,” said Chief Grover.

“We have an impressive roster of Officers right now that really want to help this community.” Officer Kramell is always involved in the many events Perry PD assists with, including his most recent involvement at Perry Central School District where he graciously volunteered for an assignment that spread awareness of impaired driving with High School students.

Not only will you see Officer Kramell as a familiar face at community events, but also in Livingston County, where he works as a part-time Deputy Sheriff.

“We really appreciate our Village Administrator Samantha Pierce for working with us on this appointment,” said Chief Grover. Citing that it has been a few years since the position was filled, he said.

“She really did a lot of leg work to get the numbers right, she makes public safety a priority for our residents”.

Officer Kramell’s appointment was official as of June 1st, 2022.