Firefighters put out a Hot Spot after the Barn Fire on N. Byron Rd.: 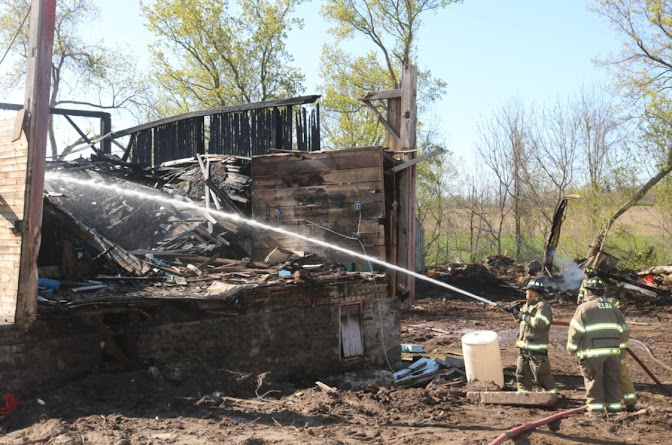 The call came in around 3:30 p.m. and firefighters responded to the scene. Mruczek said the homeowner started a burn of a brush pile. The state Department of Environmental Conservation (DEC) ban on open burning is in effect until this Sunday.

“It started as a small brush pile and got out of hand with the wind. It ended up catching the barn,” he said. “It wasn’t a full, intact barn. It was being torn down anyways. It was already being demolished.”

There were no injuries, Mruczek said.

Mruczek said the DEC and Byron Fire Department are investigating. Firefighters spent part of this afternoon putting out hot spots. He said they wouldn’t know what of significance, if anything, was in the barn until the investigation was done.

The fire chief said the wind wasn’t that much of a challenge for firefighters in knocking down the flames.

“Wind plays a factor with smoke and the direction of the flames,” he said. “I want to say it was coming from the northeast. That’s what it looked like.”

Aside from Byron, South Byron and Elba firefighters responded to the scene, as did the county Sheriff’s Office and Genesee County Office of Emergency Management and Code Enforcement. A Byron ambulance was on standby.