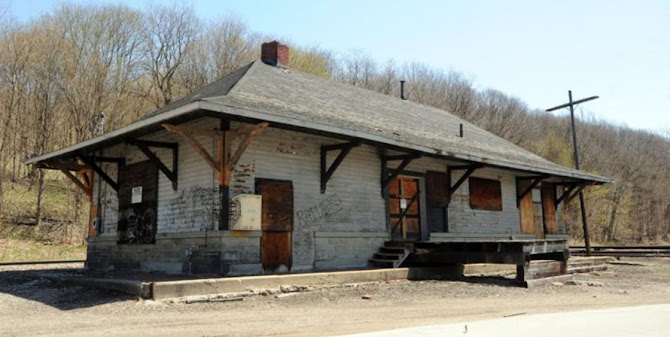 The old Buffalo, Rochester & Pittsburg passenger station was once a village hub. Well-kept and attractive, it was one of the first places travelers would see upon their arrival. But now it’s largely forgotten and deteriorating.

Village history enthusiasts are now worried about the building’s deteriorating condition — especially since the former BR&P freight house was unceremoniously demolished in December 2020.

“I may be responsible for pushing the Historical Society into looking to preserve the station,” said Gary Towner on Wednesday. “As a railroad buff with an interest in local history, I am still disgusted, as are many others, that the freight house, which was in good condition and could have been repurposed, was razed, and encouraged the society to preserve the station before it went the way of the freight house.

The passenger depot was built in 1906 at the village’s east hill on Park Street. It was part of a complex of railroad buildings which once existed at the location.

A contemporary newspaper story from its opening noted handsome furniture, men’s and women’s waiting rooms, ticket and telegraph offices, and electric lighting. But its use was largely curtailed in summer 1953 when passenger service was discontinued.

The building was otherwise used by railroad maintenance crews over the ensuing decades. Its location is now out-of-the-way and it sees little in the way of visitors.

Towner’s idea is to turn it into a museum, which is where the Warsaw Historical Society comes in. (continued)

“We were contacted last year about saving the passenger depot at the top of Park Street,” said George Anna Almeter of the Historical Society. “We have since attempted to contact the owner railroad to discuss the possibility of acquiring the depot — no luck to date. No doubt concerns over liability would be likely if the RR deeded the property to the Society.”

The Historical Society has talked with an area landowner who has offered to gift the land at one of two possible locations in the village, she said.

“The next hurdle is to get it moved,” Almeter said. “Estimated costs per Gary Towner’s inquiries could be over $50,000, as it appears the depot would to some extent need to be dismantled for truck hauling. Then there’s the cost of a concrete pad, sewer and water hookups.

“Gary mentioned an alternative,” she continued. “Building a tall wide fence in the back of the depot would discourage trespassers from frolicking on the tracks behind the depot on which trains pass today. Of course it all depends on the railroad.”

So the idea at the moment remains just that, although Towner and the Historical Society continue to work on it.

The depot’s roof appears to be in poor condition with possibly a large hole, she said. The windows are boarded up and she doesn’t know if they’re intact.

The exterior otherwise looks OK but has been hit by graffiti in places.

“We took numerous exterior photos for submission to the Pomeroy Foundation for a grant for the costs of a historic roadside marker to be installed in the Village right of way on the front side area at 116 Park Street,” Almeter said. “The depot is eligible for listing on the National Register.”

So why save the building?

Towner and Almeter each said the depot harkens back to Warsaw’s golden age of manufacturing.

It was one of several such structures in the village — besides the demolished freight house, the rival Erie Railraod had its own depot on the village’s west hill, which was itself torn down in the 1970s.

“Both offered passenger service, and both serviced the numerous salt mines in the area,” Towner said. “However, the BR&P was the only one to serve Warsaw industries via a switchback that led down into the village. That explains why there was a freight house in the middle of the village. Although the rails are long gone, you can still walk the switchback roadbed which comes out by Upstate Door on Industrial Street. A concrete whistle post is still there, and there are also remnants of the bridge that crossed the Oatka Creek in back of Montgomery Lumber.”

Towner said there are many BR&P enthusiasts. A museum could include BR&P artifacts along with those of its local successors, the Baltimore & Ohio and Chessie System.

The depot and its property are currently used by the Rochester & Southern railroad, which is itself part of the Connecticut-based Genesee & Wyoming Inc., which is one of the world’s biggest short line holding companies.

The tracks adjoining the depot are still active and see regular freight traffic. Trespassing on the tracks and property are forbidden.

“I am going to contact the R&S office in Rochester and hopefully get an answer,” Towner said. “We hope the owner would either donate the station or sell it to us for a token payment. Before the Erie station was razed, the railroad offered it to the society for $1 with the caveat that it be moved. The curator at that time turned down the offer.”

“If it gets to the point where the society has possession, it will contact the Genesee Country Village and Museum for advice since they have moved many buildings to Mumford,” he said.

So with three of Warsaw’s best-known railroad buildings gone, they’re hoping to save the last.