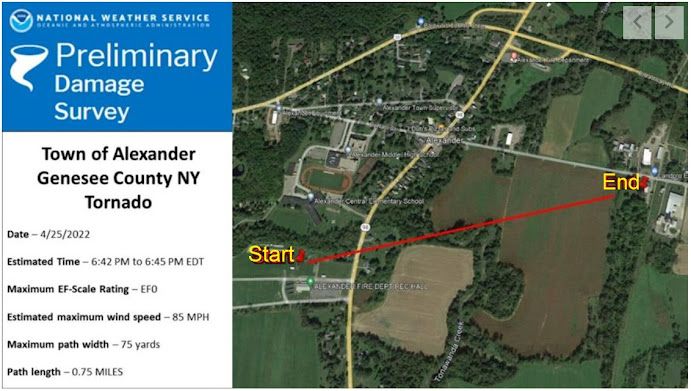 The National Weather Service has confirmed a weak tornado passed through town during Monday’s brief-but-intense storms.

The tornado touched down at 6:42 p.m. just north of the Alexander Fire Department and Recreational Hall, according to the NWS in Buffalo. A pavilion’s roof was damaged, while a trailer on the property was rolled onto its side.

The tornado then tore off shingles and shattered windows at residences along Alexander Road, before producing tree damage in a convergent pattern to the east, just before crossing Tonawanda Creek.

It ultimately crossed a field before snapping two very large trees at Alexander Cemetery and an adjacent commercial building, according to the preliminary NWS report.

All the damage occurred within a short distance and time — the tornado traveled 0.75 miles and dissipated three minutes later at 6:45 p.m.

Estimated peak winds were 85 mph. The tornado was rated as EF0 on the Fujita Scale, which measures storm intensity.

No injuries were reported and no tornado watches or warnings had been issued, although severe thunderstorm warnings were in effect.

“We extend thanks to Genesee County Emergency Management, the Genesee County Sheriff’s office and the Alexander Fire Department for their assistance on today’s storm survey,” NWS officials said in their report.

Tornadoes are rare in the GLOW region. The most recent before Monday was a storm which hit in September 2021 in Conesus and Springwater, Livingston County, and was rated an EF-1 with peak winds of 110 mph..

Other notable recent tornado included an EF-1 storm which hit the village of Corfu in 2009 and damaged several businesses, and an EF-2 rated tornado that passed through portions of Wyoming County including Warsaw, Perry and Silver Lake in June 1998.