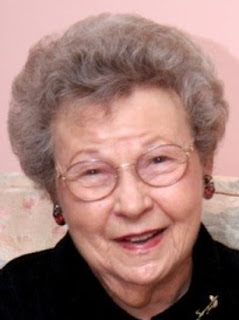 Jeanne Barger
August 5, 1924 - March 30, 2022
Jeanne Barger passed away on Wednesday, March 30, 2022. During her final days, she was surrounded by her son and daughter-in-law, Bryan and Dianne Barger, as well as her grandchildren, Katie Lund, Amy Roberts and John Barger. She was a native of Richmond, Va., born August 5, 1924. Jeanne was the daughter of the Rev. Luther and Jeanette Derby.
Upon graduating from Greensboro College with a degree in Christian Education, Jeanne was hired as the Bible Teacher for Botetourt County Schools (Virginia). She served six communities in that role, including Buchanan, where she met Walter Barger. Jeanne and Walter were married in the chapel at Ferrum College, where her father was serving as president. Jeanne and Walter had two children, Brenda and Bryan.
Following his graduation from Colgate Rochester Divinity School, Walter Barger spent most of his career as a United Methodist pastor in the Western New York Conference. Jeanne was his partner while serving churches throughout the area, including Hammondsport, Livonia, Brockport and Fairport. They made lifelong friends at each parish. She taught Sunday school and was active in each church's chapter of United Methodist Women (UMW). Jeanne was often sought out by new pastors' wives for advice on what could be a challenging role, as well as women clergy at a time when some local churches were not ready to accept a woman's call to ministry.
Jeanne held conference-wide and national roles in the United Methodist Church. She was a delegate to General Conference in 1976 and 1980. Jeanne held a variety of positions for UMW within the Western New York Conference, including president. She held national office as a member of the General Council on Ministries and served on three sub-agencies – The Unit on Missional Priorities and Special Programs, the Task Force on Design for Missional Priorities, and the Advance Committee. While serving in those roles, Jeanne traveled to Haiti to learn more about United Methodist missions there. Outside of the church, Jeanne was active in P.E.O. International.
After retiring to Buchanan, Jeanne and Walter became active in the local church and community, teaming up to teach Sunday school for several years. They loved spending summers among friends at Silver Lake, N.Y., and getting together with their First Friday group of retired pastors and spouses.
Over the last four decades, Jeanne's most rewarding position was that of Grandma Jeanne. She loved being with her three grandchildren and four great-grandchildren. Jeanne took many family trips with one grandchild resting on her left shoulder and another resting on the right. It's your turn to rest, Grandma Jeanne.
In addition to her grandchildren and great-grandchildren, she is survived by her son, Bryan, and her sister, Carolyn Micklem.
There will be a memorial service for Jeanne on Monday, June 13, 2022 at 11 a.m., at Trinity United Methodist Church in Buchanan. A reception and lunch will follow the service.
In lieu of flowers, the family requests that donations be made to the Derby Family Scholarship fund at Ferrum College. Checks can be made out to Ferrum College – Derby Family Scholarship. Mail to:
Ferrum College
Office of Institutional Advancement
P.O. Box 1000
Ferrum, VA 24088
Botetourt Funeral Home
14920 Lee Highway, Buchanan, VA 24066
Published by
Roanoke Times on Apr. 24, 2022.
SilverLakeDailyNewsletter.com on April 19, 2022.
Posted by G.A.F. at 2:00 PM