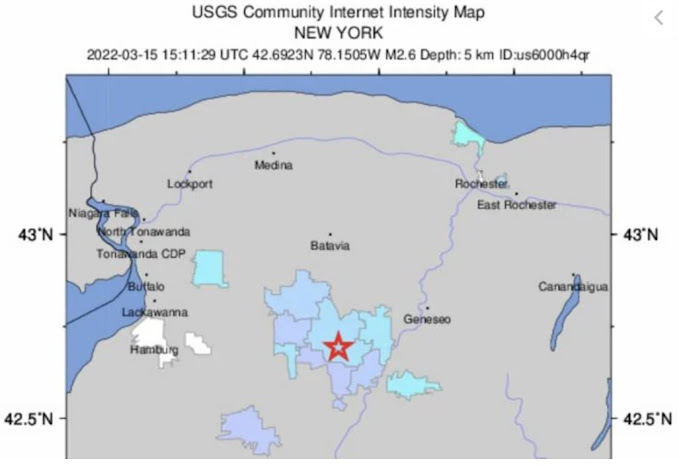 The above map from the U.S. Geological Survey plots zip codes from where reports of Tuesday's earthquake were felt. The quakes epicenter was 4.5 kilometers, or 2.8 miles, north of Gainesville.

If anybody needs the confirmation, what they felt Tuesday morning was indeed an earthquake.

The United States Geological Survey reported a minor 2.6 magnitude earthquake at 11:11 a.m. Its epicenter was determined to be 2.8 miles north of the village and 9.3 km, or about 6 miles, underground.

People throughout the surrounding area reported hearing a loud noise, and wondering what had happened.

[There were no reports to the SLDNewsletter from Silver Lake residents and checking with a non-scientific sample few, brought up mostly an element of surprise that there had been an earthquake.]

Perry resident Marleah Stout said there was no damage but plenty of noise.

“I was in my house and it almost felt like a truck had hit my house, but I knew it was not the case, because I looked out all of the windows,” she said. “There was like a loud bang and the whole house shook ... I just kind of walked around my house to see if anything had happened.”

According to the Earthquake Magnitude Scale, a tremor between 2.5 to 5.4 magnitude can often be felt, but only causes minor, if any damage.

According to the USGS database, the earthquake was the largest of three its staff has recorded in Western New York over the past year.

The area is known to have earthquakes occasionally, though quakes felt in the region are, for the most part, a curiosity accompanied by large noises.

Genesee, Wyoming, and Orleans and Allegany counties, are along the Clarendon-Lindon fault system, a major series of fault lines in western New York State that is responsible for much of the seismic activity in the region.

Tuesday’s quake is the fifth recorded in the GLOW region in the past two years, and the largest since a 2.6 magnitude quake on March 29, 2020, that had an epicenter 11 kilometers, or 6.8 miles, north of Lyndonville, putting the epicenter in Lake Ontario.

The region’s most recent earthquake occurred last month, on Feb. 19. The 1.8 magnitude quake struck at 11:12 p.m. and had an epicenter 7 kilometers, or 4.3 miles, southeast of Alexander, according to USGS data.

A significant quake in Attica on Aug. 12, 1929, measured about 5.6 on the Richter Scale and remains the largest on record in Western New York, according to USGS historical data.

About 250 chimneys and several buildings were heavily damaged, according to reports at the time. Many cemetery monuments fell or where twisted. Dishes fell from shelves; pictures and mirrors fell from walls and clocks stopped. An increased flow at the Attica reservoir was also noted for several days following the quake, and damage was reported in Batavia. The 1929 earthquake was felt throughout most of New York and the New England states, northeastern Ohio, northern Pennsylvania and southern Ontario.

Despite Tuesday’s quake being a small, it still left many residents frightened.

“It shook the house and I live in a stone house,” Stout said. “I figured if I could not see anything than that is probably what it was (an earthquake).”

Also feeling the shaking from the earthquake was Carol Wilson of Perry.

“I was sitting in my kitchen and I just felt, well I heard this rumbling sound and it kind of felt honestly like the house dropped a little and I was like ‘Okay that is weird’,” Wilson said.

It was strange, she said, but not the first earthquake she has experienced.

“I had experienced a couple of other in years past. One was maybe 25 years ago and several years ago, there was one again. So I had experienced them before and wasn’t too surprised but it is rare in this area,” she said.

“I was upstairs working and my whole desk started shaking,” she said. “I was nervous because I was not sure what was happening.”

“It was almost like I thought my washer was running, like an overloaded washer and then my whole house starting shaking,” Moag said.

Others posting to the Facebook pages of The Daily News and Livingston County News thought first of a tree falling or a large truck rumbling by.

There were no reports of damage from the earthquake.
Posted by G.A.F. at 11:30 AM