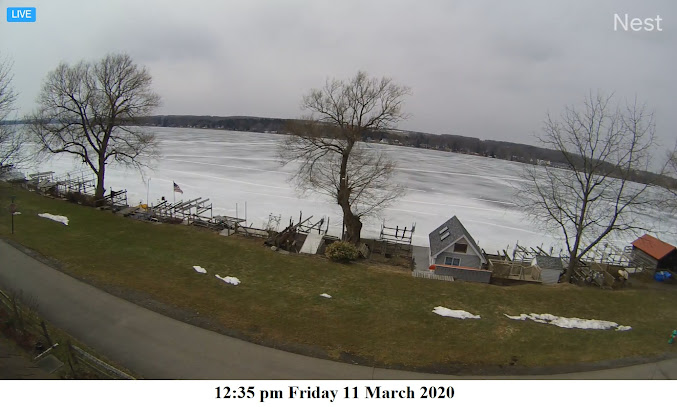 Courtesy of the Silver Lake Institute around the Mid-Lake position.
Background and Trivia Information
SLDN has been labeling the 24-7 Lake Cameras as South Cam and North Cam. It is fairly obvious that the South Cam is in the south end of the Lake, right next to the southern-most Silver Lake State Park. The North Cam is--accurately--north of the south cam, but definitely NOT in the north end of Silver Lake. The so-called "North Cam" is located in the Silver Lake Institute which is next to the mid-point of the Lake on the eastern shore.
This mid-point appears to fall between the Silver Lake Institute and the Asbury Retreat Center, both of which used to be one legal entity until 2016 when they legally separated their missions and their lands, making them two totally independent non-profits serving the Lake community. (The western shore also has non-profits serving the Lake community.)
SLDN brings this up because some will probably be noticing an interchange of terms and might wonder why.
The SLI touches the "mid-point of the eastern shore," so it is appropriately noted as such. "North Cam" is considerably easier to abbreviate, AND it is definitely north of the south cam, so you may notice our continuing use of "North Cam" or "N/Cam." Should we ever get a volunteer at the extreme north end of the Lake (where the intake and outlet are located) we will then have to yield to our being "the mid-point cam."
You may ask, "Now what was THAT all about?" SLDN has readers actually interested in details such as our use of terms or more precise locations as opposed to generalizations which are not so helpful for new folks who really do need details.
Another example is Asbury Retreat Center's continued use of the "15 Lakeside Ave." address. That address used to be the Camp Office and the home of the Camp Director, but now the offices are located on the lower ground floor of Wilmott Lodge whose official entrance is diagonally opposite the Chapman Ave. / Perry Ave. intersection. So why not change it to its Chapman Avenue address?
Answer 1:  Changing the address of an incorporated entity is not always an easy thing to accomplish; not to mention the general public's confusion caused by a "changed address" which usually implies a changed location!
Answer 2: There's often a Google problem. Trying to attempt a change may actually get the Retreat Center dropped from being recognized by the Google locator. SLI has tried many times to get its mislabeled and "previously-through-streets" changed to correct labels and deadend notations, only to have the changes misunderstood or to have them be reverted back to the outdated labels months later or even years later. Note: We haven't given up, we keep trying, and maybe one day Google will be correct. --
Answer 3: Change is time-consuming and in some cases is not an efficient use of time. Whether on a Retreat or a Camping experience, the name and location of Asbury has been well known for many a generation--even when the land under it was still a part of the Silver Lake Institute which, when combined with the land sale of 1959, makes it pretty much all of the 20th Century!
For now, Asbury is wise the leave 15 Lakeside Avenue as is. At least strangers will be put in the immediate area of the Retreat Center and drivers even have to pass the large entrance sign to get to Lakeside Avenue!
Posted by G.A.F. at 2:32 PM