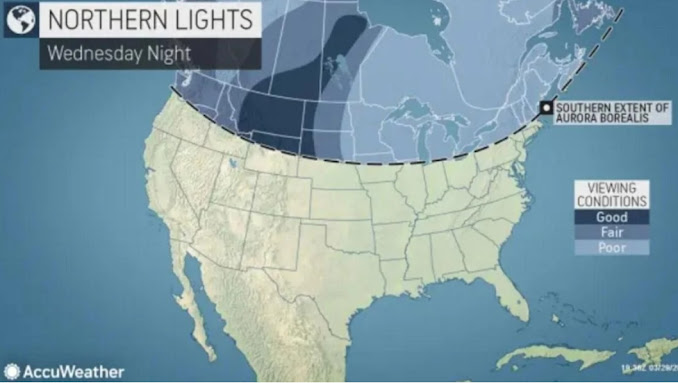 The colorful northern lights may dance across the night sky this week.

Geomagnetic storms are forecast from tonight through Friday morning, according to the National Oceanic and Atmospheric Administration’s Space Weather Prediction Center.

The storms are rated on a scale of 1 to 5, and the higher the number, the more intense the storm and farther south auroras will be able to be seen.

The current storm has a rating of 3, which can make auroras visible as far south as the New York-Pennsylvania border, according to meteorologist Eric Snitil of WROC-TV, channel 8 in Rochester.

When conditions are perfect, an event of this size can cause the northern lights to glow over New England, the Great Lakes, the northern Plains and part of the Pacific Northwest. The current storms may result in auroras from the storm being visible across Canada and the northern third of the United States, according to AccuWeather.

The lights may be visible starting at 8 p.m. Wednesday through 5 a.m. Thursday, though the timing is difficult to predict in advance, according to the prediction center.

Locally, auroras tend to favor midnight into the wee hours of the morning, Snitil wrote in a weather blog post.

Dark skies are essential for viewing auroras. For the best chance at seeing the aurora, head to a dark area away from light pollution and look toward the northern horizon, though not directly overhead. Urban glare can overwhelm auroras even during a strong geomagnetic storm, according to spaceweather.com.

Clear skies are also important, and for those of us in Western New York, far-reaching clouds will be an issue.

“A warm front will be working through the region Wednesday night, likely carrying a significant overcast with it. Skies to our north look equally problematic,” Snitil wrote. “I’m not telling you there won’t be a break or two embedded in there. But I am telling you that you’re going to need some combination of patience and luck to pull it off. .... All we’d need is a quick break in the clouds. Who knows, perhaps luck will be on our side with this one.

The northern lights, or aurora borealis, are the result of energy eruptions on the corona, our the outermost part of the sun’s atmosphere. These eruptions are called Coronal Mass Ejections, or CMEs for short.

The stronger the CMEs are when they hit Earth’s atmosphere, the farther south and more likely people are to see the northern lights.

Two ejections occurred this week, according to the prediction center.

On Monday, NOAA satellites detected two CMEs that sent charged particles hurtling toward Earth’s upper atmosphere at an estimated 522 miles per second, according to the prediction center.

The first CME occurred when the eruption was faced directly toward Earth. This has forecasters at the prediction center thinking the energy will create northern lights on at least the night of March 30 to 31.

A second CME is traveling through space slightly faster and will eventually catch up and merge with the first, forming one massive cloud of charged particles before arriving at Earth late on Wednesday, according to AccuWeather.

The northern lights form when those particles - electrons, not protons - collide with the upper reaches of Earth’s atmosphere. The result is waves of colorful light that appear to dance in the night sky.

The northern lights most frequently appear in a radiant green color, but blue, yellow, pink and red are also possible, according to the Aurora Zone.

The color of the lights is dictated by the fases with which the electrons collide, which vary based on altitude.

Green is the most common, because most solar particles typically collide with Earth’s atmosphere at an altitude of around 60 to 15- miles, where there are high concentrations of oxygen.

Significant CMEs can lead to issues with GPS systems, satellites in space and some communication systems, but the prediction center said that affects to technology from this week’s event will “generally remain small.”

More opportunities to see the northern lights could be on the way in the coming week as more eruptions on the surface of the sun are possible, according to AccuWeather.

It is difficult for scientists to predict when exactly these eruptions will happen and how big they will be, noted AccuWeather, but the bigger the eruption, the higher the chance is to see the aurora a few days later on Earth.