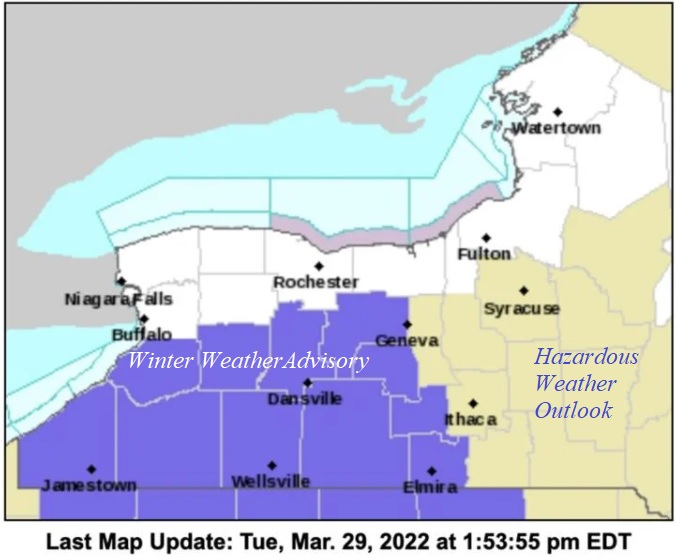 The National Weather Service has issued a winter weather advisory to begin Wednesday in Wyoming and Livingston counties where mixed precipitation is expected.

The advisory, which will be in effect from 6 a.m. to 1 p.m. Wednesday, also includes Ontario, Chautauqua, Cattaraugus, Allegany and southern Erie counties.

Periods of snow, sleet or freezing rain will result in slippery roads and limited visibilities. Total ice accumulations of a few hundredths of an inch are expected, according to the Weather Service.

Slow down and use caution while driving.

No advisories have been issued for Genesee or Orleans counties where snow and sleet are likely early, then rain with tempatures climbing to the mid- to upper-40s. The snow and sleet is expected before noon in Genesee County, and before 1 p.m. in Orleans, according to Weather Service forecasts.

The greatest chance for any ice accumulation is from southern Erie to Ontario counties southward. Here, precipitation will start sooner when surface temperatures will be below freezing, especially in the valleys, the Weather Service said in a forecast discussion explaining why an advisory was issued.

The Weather Service also said it could not rule out a brief period of freezing rain across the Buffalo and Rochester metro areas, but the later timing will mean a stronger March sun which is likely to prevent icing on roads or sidewalks.

For most of Western New York from Lake Ontario southward Wednesday afternoon will be quite nice with precipitation ending and temperatures warming into the upper 40s to lower 50s, the forecast discussion said.

Steuben County will be under a winter weather advisory from 8 am to 2 pm Wednesday. The advisory also includes Yates, Schuyler and Chemung counties.

Total snow accumulations of up to one inch along with a light glaze of ice, the Weather Service said.

Plan on slippery road conditions.
Posted by G.A.F. at 8:31 PM