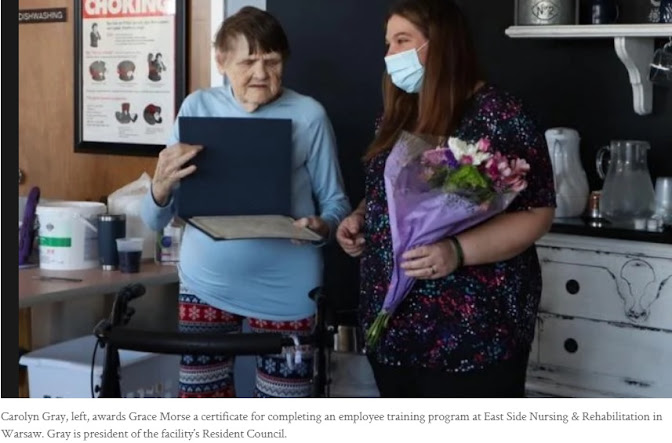 Three Temporary Nursing Aides were recognized Thursday follow-ing their completion of a rigorous and accelerated program at East Side Nursing and Rehabilitation Center.

Alexis Muehlbauer, Grace Morse, and Stephanie Hinz took part in a 12-day training and education to become certified nursing assistants and were awarded certificates for completing the program.

“It was very beneficial,” Morse said. “I learned a lot — a lot of tricks you wouldn’t normally learn, how to present different situations in different ways. It’s a good program. I’d do it again.”

The ceremony took place alongside a handful of residents of the facility. The certificates of completion were awarded to the three trainees from Caroline Gray, the president of the Resident Council at the facility.

Muehlbauer, Morse, and Hinz had to complete 150 hours of on-site work in addition to this 12-day program and will complete their state testing soon. East Side hired educator Sophia Mikolon to create the condensed program.

“It was challenging but it wasn’t impossible,” Mikolon said. “They were attentive and respectful. They have had experience out on the floor and they had picked up on the little things that you really only get hands-on.” This program was created as a response to the staffing shortages currently being faced in the healthcare field.

“It’s better than it was but it’s not where we want to be,” said Lorelle Clark, the director of nursing at East Side. Clark said that this program is a result of a Centers for Medicare & Medicaid Services waiver which was in part created to help long-term care facilities bring in more staff.

I promised them when I hired them that we’d figure out a way to get them certified,” said Clark. “They’re hard workers — they’re great girls.”

Clark said that East Side is looking to continue the program as long as they are able. The traditional CNA program takes six to eight weeks to complete and will recommence after the deadline for the waiver closes.

“It was stressful but I had a lot of confidence and I knew I could do it,” said Muehlbauer. “It was just a really good program — the teacher was amazing and the group that I worked with was also really amazing.”

The next class will begin on March 28 and accommodate three more trainees..
Posted by G.A.F. at 10:04 PM