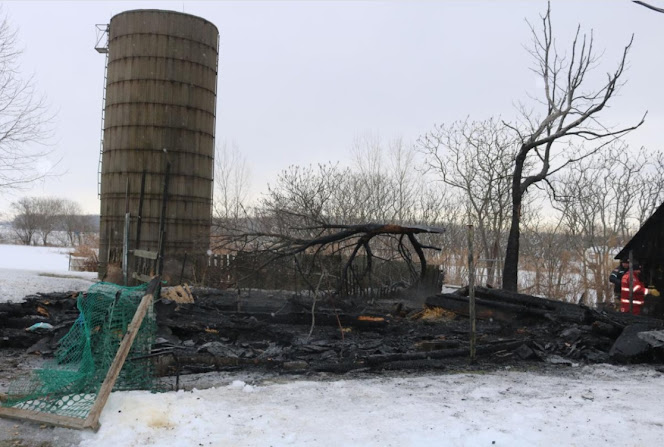 “I live right around the corner on Edwards Road. I was here within a couple of minutes,” he said. The barn was fully involved when he arrived, the fire chief said.

“(It was) a small barn fire, with exposures, with a larger barn next to it and a smaller shed,” he said. “We ended up saving those two structures and a complete loss of the barn itself.”

There were no injuries, but some chickens in the barn were lost, Watts said. The cause is under investigation by Orleans County.

“We had it under control probably within a half hour of the original call,” he said. “We did have a problem with the hydrants this morning so we ended up calling in a couple of tankers to mop up. With the cold, we had problems with the hydrants.”

Watts said there were no people in the barn when the fire started. The barn was being used for storage and had a chicken coop in it, he said.

“We had Medina and East Shelby mutual aid,” Watts said. Orleans County Director of Emergency Management Dale Banker was on scene as well.

Watts estimated the fire was out about an hour after arrival at the scene.

“Just mopping up some hotspots here and there. We had the town of Shelby bring out a backhoe to help us pick apart some hotspots that we couldn’t get to,” he said.

Part of South Gravel Road was closed during the response and was reopened around 9 a.m.