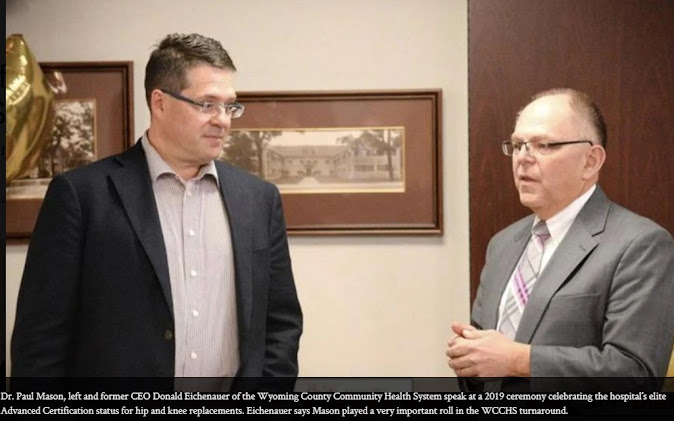 Donald Eichenauer played a key role in the Wyoming County Community Health System’s turnaround. Eichanauer, who served as the system’s Chief Executive Officer from 2012 to 2019, was part of a team which instituted upgrades worth tens of millions of dollars at the facility — and saw its reputation improve significantly over that period.

He’s among a growing outcry of voices expressing concern over the decision to terminate orthopedic surgeon Dr. Paul Mason.

“First there is the impact on the community of Dr. Mason’s termination itself,” Eichenauer said Sunday. “Over 2,000 community members, including physicians, employees and patients, have signed a petition expressing their displeasure and detailing its impact on their lives.”

Eichenauer also cited a “farewell letter” written by Mason to his patients within the community. The letter described an environment which has led to the termination or resignation of 14 physicians, medical providers, Board of Managers members and others playing important, or even key, roles within the WCCHS.

Eichenauer also noted that — according to Mason’s letter — no plans have been announced for replacing the three orthopedic surgeons who have departed, while orthopedic services are the largest revenue producers at most facilities.

“This would appear to be cause for concern in an organization’s ability to be financially successful while providing quality care,” Eichenauer said.

Mason began working at the WCCHS in 2014, when the system established its orthopedic clinic. He performed more than 300 surgeries there became joining the system full-time in December 2017.

Eichenauer noted at the time that community reaction to Mason and the entire orthopedic clinic was exceptional. All three of its physician providers ranked in the top 98th percentile in patient satisfaction in nationally conducted surveys.

Wyoming County Community Hospital likewise received Advanced Certification status for its total knee and hip replacements in March 2019. The hospital was among only seven statewide — and few nationally — to meet the painstaking standards required.

Mason was serving as the department’s chairman of orthopedic surgery and the hospital’s chief medical officer at the time.

Eichenauer was set to retire in December of that year. The plan was for incoming CEO Joseph McTernan to work with him as part of the transition.

In his “farewell” letter to his patients, Mason said that soon changed.

“Immediately following the retirement of former CEO, Don Eichenauer, the previously stated plan for Mr. Eichenauer to remain in a mentoring role of the new CEO and advisory role to the Board of Managers was eliminated,” Mason wrote. “This resulted in a significant change not only to the leadership, but the future direction of the hospital, causing a palpable decline in hospital culture.

“One of the biggest changes was scrapping the well-established plans to continue to grow quality medical services and build a new ‘state of the art surgical center,’ replacing the very tired existing operating rooms, and continuing to create a rejuvenated sense of excitement for the hospital and community,” Mason continued.

Mason — who said his departure was not his choice — said the “new direction” at the hospital resulted in the termination of several medical providers.

Four members of the WCCH Board of Managers were also forced out or resigned after opposing the “new direction” post-Eicheauer, Mason said. They included Town Supervisor Douglas Berwanger of Arccade, along with Frank Vitagliano, Mark Merrill and Cindy Elbow.

The WCCHS likewise lost Chief Financial Officer, and its Director of OR and Women’s Health Services over the past year, Mason wrote.

As of his letter, the county website listed vacancies including its CFO, Controller, Director of Maternity and Women’s Health, Director of Surgery and 29 Registered Professional Nurses.

“Unfortunately, this systemic eradication of services and individuals has not spared (Physician Assistant Jim O’May) or me,” Mason wrote.” We have recently been informed that our contract was being prematurely terminated, despite three years remaining and the expectation that we would finish our careers at WCCHS, likely another 10 years.

“Although the reasons behind these changes, per the Board of Supervisors and certain members of the Board of Managers, appear to be misguided, as the quality of care of providers terminated cannot be questioned, it has caused significant harm to the individuals involved and the overall quality of medical care to the community,” he wrote.

Eichenauer described his own worries about the situation in a letter sent Saturday to The Daily News.

He said the WCCHS and the county itself were experiencing financial difficulties when he became CEO. The system was also receiving the lowest quality ranking of Western New York hospitals.

But hospital and county officials determined a clear direction for improvement.

“The Board of Supervisors held numerous community forums which I attended,” Eichenauer said. “If there was one message that was loud and clear from citizens, it was, ‘We are all going to experience a medical emergency or illness; we need this community hospital, but we need quality.’”

The Board of Supervisors and Board of Managers provided significant support at that time in an effort to create a quality rural hospital, Eichenauer said.

Mason was one of the first physicians recruited as part of that process.

The WCCHS needed to improve its culture and quality, Eichenauer said. Its officials were aware of Mason’s reputation and personality — and they needed a “championship quarterback” to help lead their efforts.

“We quickly understood his impact on the hospital and community,” Eichenauer said of Mason. “He enjoyed his role at WCCHS, shared our vision, dedicated himself to his patients and was instrumental in helping improve quality and recruit additional excellent physicians.

“As WCCHS’s orthopaedic practice expanded to six quality providers and attracted patients from Olean, Buffalo and Rochester, I received calls from rural hospitals across the state and even national consulting firms asking how we were able to accomplish this at a small rural hospital,” he continued.

Besides affecting patient care, the loss of a quality orthopaedic surgeon can result in a hospital revenue loss of $4 million or more, Eicheaneur said.

The WCCHS orthopedics services were attracting patients from as far as Buffalo, Rochester and Olean.

“As I did rounds visiting patients in the hospital, I literally had patients get out of their hospital bed to shake my hand and thank us for recruiting surgeons with the quality of Dr. Mason and enabling them to feel confident about obtaining their healthcare services locally,” Eichenauer said.