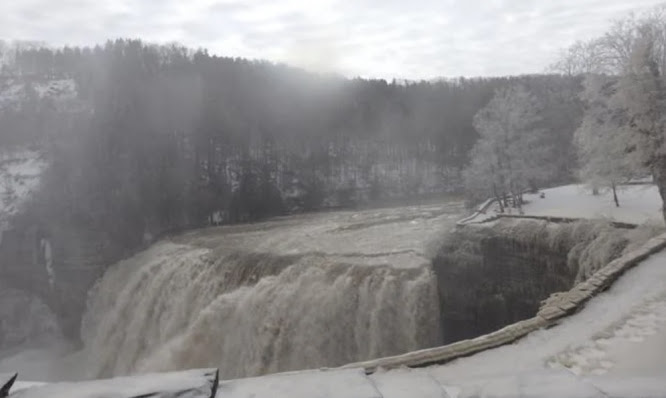 The usual “whoosh” of the park’s middle falls had become a loud roar, with a column of mist rising high into the sky beyond. The environment? Wet and icy for the few people making their way to the falls through the chilly spray.

The most comparable conditions took place in 1979, according to the National Weather Service in Buffalo.

“I think it’s amazing,” said Sandy Dagostino of Buffalo who drove out with her friend Nancy to take photographs. “Especially in the winter. To come here and seeing it, it’s really beautiful.”

The two set up near the Glen Iris at first, before walking carefully down the slippery trail to the falls — almost like walking into a cloud.

The last time water levels were this high in the Genesee River was in June of 1972. Hurricane Agnes swept across the state and the Mount Morris Dam saved the watershed from ruin. The dam came within a few feet of overtopping, meaning that there was about a 200 foot deep lake of water collected behind the dam. Temperatures remained a frigid 20 degrees about 10:45 a.m. Minor flood warnings remained in place Thursday for Oatka and Black Creeks.

Steve Winslow, manager of the Mount Morris Dam, said that the approximate 200 feet lake of water is equal to 302,000-acre feet of water, or around 98 billion gallons of water.

In response to the current period of rain and snowmelt, the dam closed down completely last Friday in preparation for the influx of water. River levels were sitting at about 25 to 30 feet deep on Friday. River levels currently sit impounded at 113 feet deep at the dam.

“It’s like having two Conesus lakes stacked on top of each other,” said Winslow.

In 1944, under the Flood Control Act, the Mount Morris Dam was commissioned. It was built from 1948 to 1954 at the northern end of the Letchworth Gorge.

Winslow explained that the location of the dam was intentional, so that the gorge itself could act as the reservoir impoundment area to collect water.

“We had a pretty heavy snow pack and then some spring rain piled on top of that and the river got deep quickly,” said Winslow, in regards to the current high waters. “We ended up closing the dam down last Friday completely and that allowed the river to drain more effectively — the river stage still went quite high in areas like Avon and down towards the city, but it didn’t flood.”

The draining of the dam is weather dependent according to Winslow. It could take only a few weeks if dry weather continues to persist or it could all change quite quickly and remain at high levels.

The Genesee River has been a large influence on various aspects of the life that has existed within its watershed for hundreds of years.

In the 1860s, when the city of Rochester was developing, there was concern about the damage that the flooded river could cause.

These concerns led to construction of Mount Morris Dam, which the U.S. Army Corps of Engineers says has prevented more than $3 billion in flood damage since its construction.

Although the Mount Morris Dam was able to hold back billions of gallons of water from flooding areas downstream over the past few days, there were a few areas that met minor flood stage levels. These areas were primarily along tributaries that flow into the Genesee River.

Oatka Creek and Canaseraga Creek, where they both flow into the river experienced minor flood stage levels, along farmland and drainage areas. There was minor flooding in Avon along the Genesee River as well.

“The dam is arguably even more important now than it was when it was initially constructed, and I say that because there’s a lot more infrastructure in the areas downstream than there would have been in the ’40s and ’50s — it’s even more relevant.” said Winslow.

The up-and-down weather is expected to continue for the short tem.

Winter weather advisories will be in place today for much of the GLOW region.

A winter weather advisory is in effect until 4 p.m. today for Genesee, Livingston, Wyoming and Erie counties, according to the NWS.