August 4-6 2022 plus SLI's Lakeside Worship & Free Concert:
Just 3 of the 90 Workshops and Presentations to be Enjoyed at this
Year's Silver Lake Experience 2022 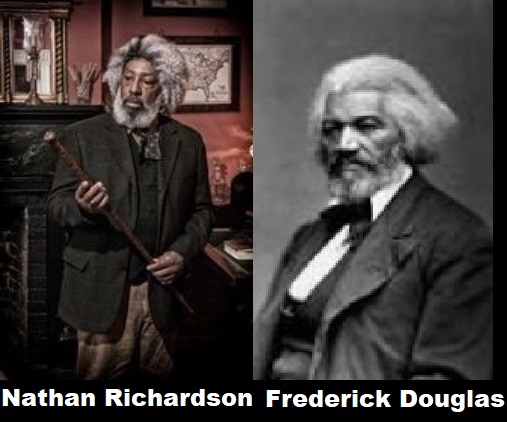 Nathan M. Richardson is an accomplished performance poet and published author. Demonstrating his ability to switch hats from poetry and storytelling to history and theater, Nathan delivers a remarkable portrayal of the former slave, writer, orator and abolitionist Frederick Douglass.
By The Editors of Encyclopaedia Britannica
Below is the article summary. For the full article, see Frederick Douglas.
Frederick Douglas was at the forefront of the U.S. abolitionist movement in the 19th century, and he is particularly well known for his autobiography, "Narrative of the Life of Frederick Douglass, an American Slave, Written by Himself" (1845; revised and completed in 1882 as "Life and Times of Frederick Douglass"), which gives an account of his escape from slavery and his pursuit of literacy, education, and independence. The work established Douglass as the leading African American man of letters of his time.
Malinda Grube, PhD, Portrays
Elizabeth Cady Stanton.
Friday, SLE 2022 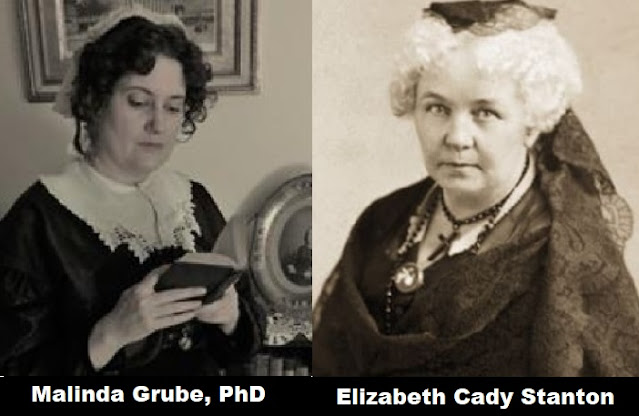 Melinda Grube, PhD, a descendant of a Seneca Falls abolitionist family, has followed an educational path inspired by women’s rights history. Dr. Grube is an adjunct lecturer of history at Cayuga Community College and has portrayed Elizabeth Cady Stanton for educational programs, lectures, and events in Seneca Falls and throughout New York State for more than a decade. Dr. Grube has discussed the joys and challenges of portraying real people from the past in modern times.

By The Editors of Encyclopaedia Britannica
Below is the article summary. For the full article, see Elizabeth Cady Stanton.
Elizabeth Cady Stanton, orig. Elizabeth Cady, (born, Nov. 12, 1815, Johnstown, N.Y., U.S.—died Oct. 26, 1902, New York, N.Y.), U.S. social reformer and women’s suffrage leader. She graduated from Troy Female Seminary (1832), and in 1840 she married the abolitionist Henry B. Stanton and began working to secure passage of a New York law giving property rights to married women. She and Lucretia Mott organized the 1848 Seneca Falls Convention. She joined forces in 1850 with Susan B. Anthony in the woman suffrage movement, and later she coedited the women’s-rights newspaper The Revolution (1868–70). In 1869 she became the founding president of the National Woman Suffrage Association.
Maggie Moore-Holley
Portrays Harriet Tubman
Saturday, SLE 2022 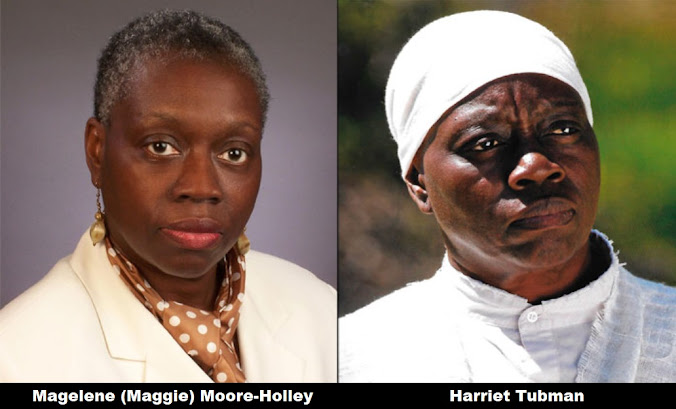 Magelene Moore-Holley is a native of Kingstree, South Carolina.  She is the 13th of 15 children born to Emma and Amos Moore. She received a Bachelor of Arts in Cultural Studies from Empire State College in 2004 and a Master of Divinity from Northeastern Seminary in 2008.  She is a member of AKOMA, the African-American Women’s Gospel Choir and AKWAABA, the Heritage Associates, whose members attempt to bring to life the accomplishments and struggles of the women and men on whose shoulders we now stand. Magelene recently completed a one-year contract with AmeriCorps of Rochester where she worked within the City school system with the expectation of discovering ways in which she could contribute to the growth and strength of our youth.  She also has a passion for the liberation of girls and women from systemic global discrimination both in the community at large and in the church. She is a wife and mother of two adult children.  She enjoys reading, teaching, acting, and singing.  Magelene is a member of Memorial AME Zion Church in the city of Rochester.
By The Editors of Encyclopaedia Britannica
Below is the article summary. For the full article, see Harriet Tubman.
Harriet Tubman escaped from slavery in the South to become a leading abolitionist before the American Civil War. She led hundreds of enslaved people to freedom in the North along the route of the Underground Railroad—an elaborate secret network of safe houses organized for that purpose. Tubman was also known as Araminta Ross, daughter of Benjamin Ross and Harriet "Rit" Green. Tubman was born c. 1820 in Dorchester, Maryland and died March 10, 1913 in Auburn, NY. She was married to John Tubman, 1844-1849; married to Nelson Davis, 1869-1888. During the Civil War, Harriet Tubman was also a secret spy and military leader. In 1863, Harriet Tubman led soldiers with Colonel James Montgomery to raid rice plantations along the Combahee River in South Carolina. They set fire to buildings, destroyed bridges, and freed many of the slaves on the plantations.
Posted by G.A.F. at 3:46 PM