from an open trailer gate 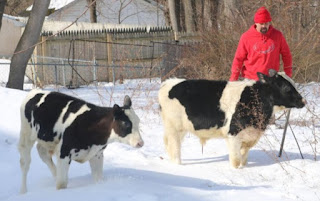 There were cattle on the loose for a little while this afternoon when a trailer door opened while the animals were being transported and three jumped out.

Police reported getting calls that three cattle jumped out around the intersection of Main Street and Route 19. One of the witnesses was a woman driving behind the trailer, which was hooked up to a pickup truck.

After the cattle were all safely back in the trailer, a man who was a passenger in the truck said the woman had told them the cattle jumped out.

“Otherwise, we probably wouldn’t have got them, because they would have been far enough (away),” he said. “Her son’s the one who chased one of them, got a rough idea of where they were. I thought maybe, once they got going, they’d keep going.”

One of the cattle was corralled on Warner Park, off of Summit Street, and the other two behind property on West Main Street.

Le Roy police and the Genesee County Sheriff’s Office responded to the incident.

The driver of the truck was picking up cattle from a farm in Le Roy and was taking them to his farm in Churchville when this incident happened, said Le Roy Officer Curtis Miller.

“I got two calls on it, one for loose cattle on Warner Park and then the lady who stopped out with them actually called 911 as well, saying three of them got out. Some good neighbors on Warner were able to corral one cattle in the front yard and then got that cattle, and then we drove out here, and the deputy ... located the two back here,” he said, pointing to a wooded area further behind the West Main Street property. The other two cattle were corralled there and all three were put back in the trailer.

Miller said two of the three cattle had walked west from Walgreens, 8 W. Main St., to the wooded area and the backyard, where they were found. There had been reports of cows in the road near Rite Aid on West Main, but Miller said it was actually Walgreens.

“I headed to Rite Aid and I didn’t see anybody there,” he said. Miller said calls about the cattle came in around 12:45 p.m.