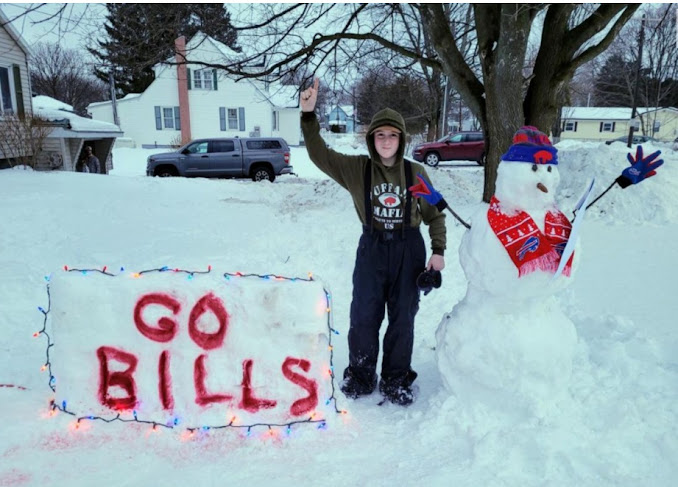 Logan Schroeder may only be 12 years old, but he’s been a big Buffalo Bills fan for a long, long time. You could say it runs in the family as a matter fact. He attends all the home games he can, along with his parents and two brothers.
So the snow sculpture he created on his family’s front lawn was an obvious choice: A snowman decked out in Bills fan gear, with a sign reading “Go Bills” and a string of lights in the team colors. And a Buffalo Bills flag.
“My whole life, ever since I knew they were a thing,” Logan said of his fandom.

Logan said he first became acquainted with the Bills when younger, when he was playing for the Genesee Valley Bills youth football team.

And in his family there’s a joke that you can’t not be a Bills fan. They’re nine-year season ticket holders.

Logan said he got the concept from his father Jeremy. He set to work after school on Tuesday and his sculpture was completee after two or three hours.

Well, nearly everything. They’re a local team, and he loves the fans and the game itself.

“His favorite player on the current roster is Stephan Diggs, but he is also a Jim Kelly fan,” said his mother Jennifer. “Logan played youth football from kindergarten to fifth grade for the Genesee Valley Bills, so he has also been a Bill (of sorts) himself. He also attended the AFC East championship game this season and he said it was the best game ever ... Lots of Bills gear/clothes, posters, helmet, Legos, stadium puzzle, hats, etc. — his most prized item is a Bills hat he got signed by a number of players driving out of the stadium a few years back after a home game.”

The Schroeders took a break from attending the games last year due to the COVID-19 pandemic. But now they’re vaccinated and the family — which also includes Logan’s brothers Hayden and Ethan, are back at the games.

When he’s not at Bills games, Logan’s a seventh grader at Letchworth Central School.

He and his family will be watching the Kansas City game this weekend. Jennifer Schroeder said they’ll be cheering on their team, and loud.

Does Logan have a prediction?

“At this point, they’ve been doing good enough I’m confident they’re going to kick some butt,” he said.