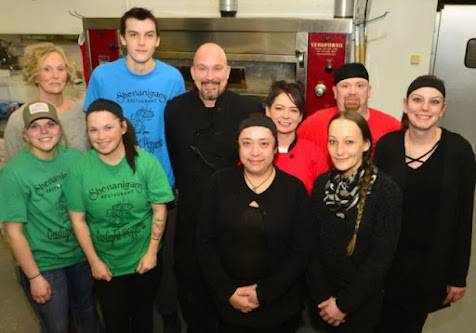 Doug Tillotson and Sarah Giron know pizza. Dan Huehn knows fine dining. So when the oppor-tunity presented itself, they knew it offered a nice opportunity. It’s led them to cre-ate Shenanigans Fine Dining and GaslightPizzeria.

“The town needed another pizzeria and (Tillotson and Giron) have got a really great product,” Huehn said. “We also thought that we could bring something a little bit better than a diner to the community.”

Tillotson and Giron operate the successful Wyoming Gaslight Market in the nearby village of Wyoming, which has become known for its pizzas. Huehn is a longtime and experienced chef who returned to Warsaw in 2019 and ran his own baking business. They said area businessman Jim Rutkowski brought them together and the idea grew.

They spent the past few months renovating their location at 425 North Main St. before opening last month. The restaurant includes all the foods a pizza place traditionally offers — such as subs, chicken wings and salads — but its dining section also offers steaks, salmon, pork chops and more. Which is not to forget fish fries, which have also proven highly popular.

Huehn said they’re currently determining which dishes are popular and what customers will enjoy most. The fine dining menu will develop and expand as they see what people like.

“That’s why we’ve got a small menu for the restaurant right now, so we can get people trained to see what people want,” Huehn said. “The pizza side was a no-brainer,” Tillotson. “That was very good, opening so far.”

Tillotson said the approach is the same as the Wyoming Gaslight Market — filling a need in the community. He had suggested something a bit more of a pizza place, which would fill both he and Heuhn’s visions.

“It’s working out really well, because we have a lot of people who come in, and they’ll order steaks and then get a pizza as well,” Heuhn said. “It’s really a unique kind of place. That’s where we came up with ‘Shenanigans,” because we have two things that don’t really go together, but we’re making it work.”

The response has been strong so far, they said. They offer also offer homemade cakes and pies for desserts, and Heuhn places an emphasis on making its foods from scratch.

“You get a burger, it’s coming on a homemade roll,” he said. “Little things like that.” “Dan makes his own bread and rolls,” Tillotson added. “We make our own dough and we make our own sauces every day.”

Shenanigans sold out its fish fries the first night they offered them — which is obviously both nice and encouraging.

“We went through five cases again last week,” Heuhn said. “There’s a lot of people who are doing frozen ones and we aren’t. We’re battering them and putting them in the fryer so it’s traditional. You get a better flavor.”

The restaurant is still evolving as it develops its target market. They plan on adding pastas and seafood. They’re also looking into adding a smoker for barbecues, and even a food truck or tailer they could park out front to offer quick lunches outside.

They’re looking to offer something better and more enjoyable than fast food. What’s been the best part? “It’s the completion of it — both our visions and it’s come together,” Tillotson said.

“I definitely agree,” Huehn said. “Watching it come together, and building the team, and getting them all to work together, I think that’s fantastic. And just to be able to give something better to people ... Just keep going. It’s a great location.”