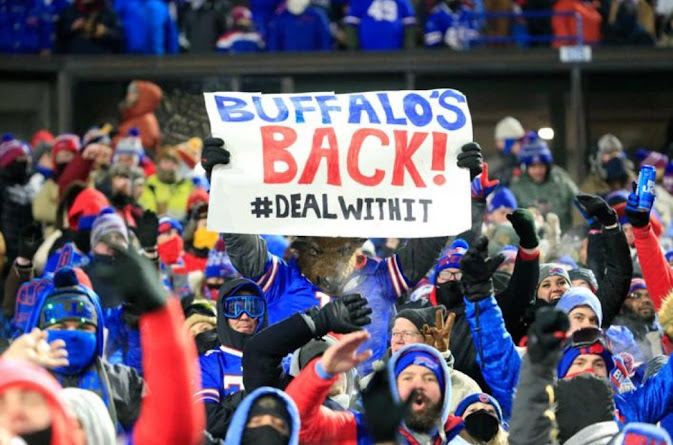 The Bills' 47-17 thumping of the New England Patriots at Highmark Stadium in the wild-card round of the NFL playoffs was not a dream. From Josh Allen's five touchdowns to dynamite performances by Devin Singletary and Dawson Knox, Buffalo avenged 20 years of pain by ending its arch-nemesis' season Saturday night.

The News' team of reporters worked deep into the night, with Jay Skurski focusing on the efforts of two offensive standouts, Jason Wolf detailing major achievements – like how the Bills were the only team in NFL history to not attempt a field goal, punt or commit a turnover in a single game – and Katherine Fitzgerald homing in on the biggest moments of each quarter.

Mark Gaughan focused on plays that shaped the game, including the first-quarter touchdown pass from Allen to Knox where the Bills' quarterback hung onto the ball for nearly 10 seconds before finding his target with a pass he'd intended to throw away.

After braving the bitter cold, Bills fans took to Twitter to share their satisfaction at beating a longtime rival so comprehensively.

Browse The News' complete coverage – with photos and videos to complement the stories – from the Bills' win over the Patriots.