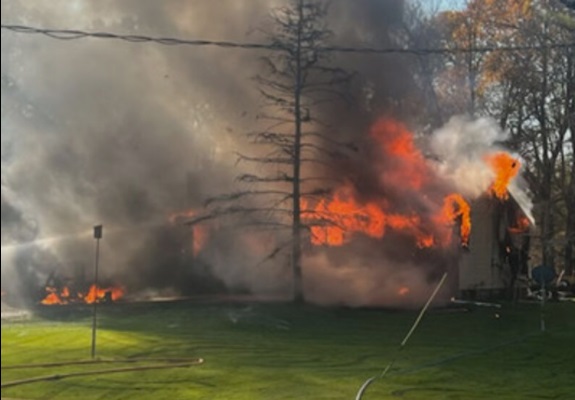 A Livingston County woman was pulled from her burning home Tuesday afternoon after a neighbor used a tractor to tear through a wall to get to her. The fire destroyed the home on Pond Road. The woman is identified as 67-year-old Cynthia Chambery. She died Tuesday at Strong Hospital following the incident.

Her husband was in the garage when the fire broke out. Neighbor Jeff Tanner asked him if he could break down the wall with his tractor.

"So I started with the window and tried to break the wall down. My tractor’s not that powerful. I just kept ramming it. I took the one wall out," Tanner said. "And I asked where the bed was and the bed was right up against that wall. So then I used a maul to break that down and peel that out – took the nightstand out and I used my phone – I didn’t have a flashlight – I used my phone – and I could see her laying there."

He grabbed the woman and two other individuals who arrived on the scene pulled her out and brought her to some nearby trees for safety. With ammunition exploding inside the structure, Tanner says he and a police officer pulled her away to the safety of some nearby trees.

13WHAM's Doug Emblidge asked him what was going through his mind.

"To get her out. Get her out before the flames get there. It was fully engulfed in smoke but no flames yet. Get her out. Had her on the ground. There was no pulse but the EMS showed up perfect timing and started working on her right away," he said.

While Tanner says he was just being a good neighbor, first responders on the scene say what he did was nothing short of amazing.

TWEET UPDATE from @13WHAM: "Update from Lima fire scene. This neighbor [pictured above] hopped on his tractor and used [it] to break down [the] bedroom wall to rescue [the] woman inside. She is being treated. Her husband is OK. State police [are] investigating."

"State Police say [the] woman pulled from [her] burning home in Lima has died. Cynthia Chambery, 67, was pulled from her smoke-filled bedroom by neighbor Jeff Tanner, who used [his] tractor to break down [the] wall, then smashed his way in with a maul. [He] found his way to [the] victim with [his] cell phone flashlight."
Posted by G.A.F. at 9:04 AM