Native Was Killed in Combat During Service to Country:
Honoring a Pembroke native: Stretch of highway dedicated to Clarence,
“C. Jay” Hall for Bravery in Vietnam 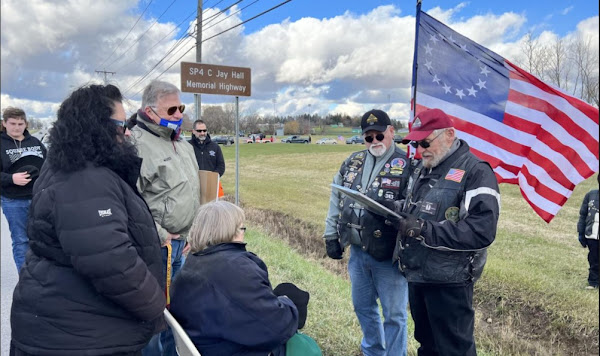 Standing on Route 77 by the Pembroke High School, community members gathered Tuesday to honor Clarence “C. Jay” Hall. Part of the highway between Pembroke Town Park and the intersection with Indian Falls Road was dedicated to Hall, while a sign by the high school and cemetery reads “SP4 C. Jay Hall Memorial Highway.”

A Pembroke native, Hall was an Army rifleman who was drafted to fight in the Vietnam War. He was mortally wounded on Oct. 7, 1969 at the age of 20, during an attack by enemy forces in Binh Duong, Vietnam. Hall had exposed himself to hostile fire with complete disregard for his personal safety while his comrades were able to obtain cover. “The story of C. Jay Hall’s sacrifice and bravery in the face of danger encapsulates the selfless spirit of our service members,” said Assemblyman Steve Hawley.

“I’ve always been proud of my brother. He was my best friend,” said Sandra Hall, younger sister of C. Jay Hall, pictured seated above.

The Veterans Outreach Club at Pembroke got the ball rolling to get the highway dedicated to Hall. Pembroke 2019 graduate Megan Stiles was the leading the initiative — she did presentations and got letters of support from the Corfu Village Board, the Pembroke Town Board, the Genesee County Legislature, and the Pembroke school board.
Posted by G.A.F. at 10:25 PM