Consumers ﻿nationwide advised ﻿to throw out any unlabeled red, white or yellow onions 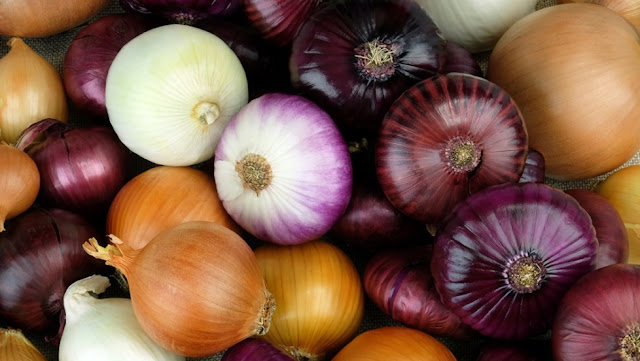 LEVENTINA / GETTY IMAGES
by Aaron Kassraie, AARP Updated October 22, 2021
More than 600 people have gotten sick from an outbreak of salmonella linked to red, white and yellow onions imported from Chihuahua, Mexico, the Centers for Disease Control and Prevention (CDC) announced﻿ on Oct. 20.
The onions were distributed by ProSource Inc. and sold to restaurants and grocery stores nationwide. Although the onions were last imported to the U.S. on Aug﻿. 27, they can last up to three months in storage and may still be in homes and businesses.

ProSource has voluntarily recalled whole onions shipped from Chihuahua between July 1 and Aug﻿. 31, 2021. The onions were distributed in 35 states in mesh bags ranging from 2 pounds to 50 pounds and in cartons ranging from 5 pounds to 50 pounds.
Affected onion﻿ brands include Big Bull, Peak Fresh Produce, Sierra Madre, Markon First Crop, Markon Essentials, Rio Blue, ProSource, Rio Valley and Sysco Imperial﻿, according to the recall announcement from the Food and Drug Administration.

Additionally, Keeler Family Farms voluntarily recalled its red, yellow and white onions sold under the MVP brand that were shipped from July 1 to Aug. 25 and imported from Chihuahua, Mexico. Although to date no onions marketed through Keeler Family Farms have tested positive for salmonella, the recall is being implemented out of an abundance of caution.
Its onions, sold in 25 and 50 pound mesh sacks, were distributed to wholesalers, restaurants and retail stores in all 50 states and the District of Columbia, according to the recall notice.

The CDC says﻿ that 652 people ﻿were ﻿confirmed to ﻿have been infected with the outbreak strain, Salmonella Oranienburg, in 37 states between May 31 and Sept﻿. 30. They range in age from ﻿﻿less than a year to 97. Of ﻿those victims, ﻿129﻿ were hospitalized.

Additionally, 145 of the 193 people ﻿who provided ﻿detailed information ﻿on their illness reported eating or possibly eating raw onion﻿s before becoming sick. Several ﻿had eaten at the same restaurants, which ﻿helped investigators determin﻿e that many ﻿had eaten raw onions. ﻿
Officials are still working to identify other possible onion suppliers that may be linked to this outbreak.﻿ The restaurants were not publicly identified.﻿

The actual number of infections is likely higher because people are not regularly tested for salmonella, the CDC says, and many who are infected recover without seeing a doctor. Since it takes up to four weeks to determine if a sick person is part of an outbreak, more victims may be added to the total.

﻿Possible onion outbreaks can be difficult for experts to investigate﻿, since onions are a “stealthy” ingredient in many dishes, ﻿and people may not know if they’ve eaten the﻿m, ﻿the CDC says.

Onions can become contaminated at any point in the food supply chain ﻿— while growing in the fields, during processing or distribution﻿, or ﻿when they’re being prepared in a restaurant or home. Last year﻿, a salmonella outbreak from contaminated red onions caused ﻿more than 1,000 infections.
Advice for consumers
States where sick people lived map of the u s showing that most states have been affected by the onion salmonella outbreak the states that have no reported cases so far are the extreme northeast and northwest states as well as outside on the continental u s AARP 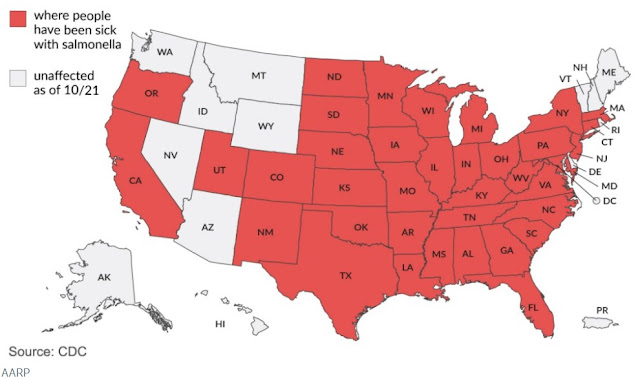 Symptoms of a salmonella infection:
Adults 65 and older and those with weakened immune systems are at a higher risk for severe salmonella illness. Infections caused by the bacteria lead to about 26,500 hospitalizations and 420 deaths in the U.S. annually, the CDC says. Tainted food is the primary cause of these illnesses.

Those who contract salmonellosis, the intestinal infection caused by the bacteria, typically experience diarrhea, fever and stomach cramps. In severe cases, the infection can spread beyond the intestines. ﻿Although symptoms usually begin six hours to six days after infection and last up to seven days﻿, in some instances, ﻿they appear weeks after infection or persist for weeks, ﻿say the CDC.

Infections are diagnosed with a lab test. Although most people ﻿can recover without an antibiotic, one is recommended for anyone with a severe illness. Antibiotics are also recommended for infected adults older than 65 (or over 50 if an underlying condition such as heart disease is present), infants﻿, and those with weakened immune systems.

Most people recover from salmonellosis in four to seven days.

Call your health care provider if you experience any of these severe symptoms﻿: