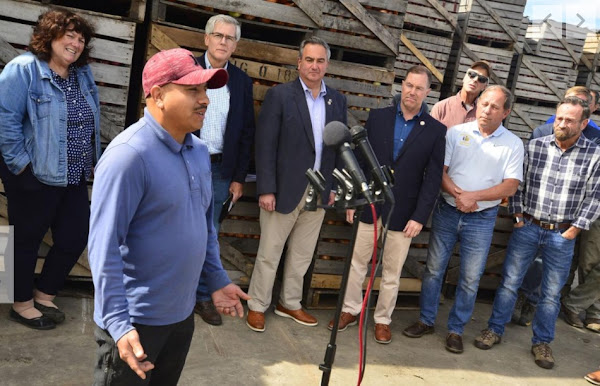 Farm worker Alfredo Mejia speaks out on the decrease of work hours. He has been employed by MY-T Acres since 1996.
By MALLORY DIEFENBACH


Area farmers and officials said Tuesday that lowering the state’s overtime threshold for farmworkers could place the region’s agriculture in jeopardy. Gathering at Torrey Farms, the group — which also included farmworkers — discussed their industry and the potential effects of lowering the threshold from 60 to 40 hours.

The worries stem from the Farm Laborers Fair Labor Practices Act that was signed into law by former Gov. Andrew Cuomo in 2019. It took effect last year. The law requires overtime when farmworkers hit the 60-hour mark. The New York State Wage Board is slated to revisit the law in next few months and determine if an adjustment to 40 hours will be necessary. Those at Thursday’s news conference said such a decision would have multiple bad effects.

The farmers said if the overtime threshold was lowered, they would reduce the amount of hours their employees could work because they can’t afford time and a half. And that could have a ripple effect in terms of a labor shortage, in one of the region’s biggest industries.

“I think more importantly if we cut workers back, the workers have the opportunity to work elsewhere,” said Jim Bittner, owner of Bittner-Singer Orchards in Niagara County. Christian Yunker, of CY Farms in Elba, said its impossible to hire more employees right now. There aren’t more employees to hire.

“We’re blessed with a state with very diverse agriculture,” he said. “We grow a lot of high value crops. The crops and commodities we grow take a lot of labor. That’s in jeopardy now. This diverse agriculture we have is in jeopardy.” Yunker said they aren’t growing as many labor-intensive crops as they used to due to the labor shortage.

Farmers and farmworkers both said farmworkers want to work as many hours as they possibly can. Sdeyn Van Sdiden, a farmworker from South Africa who works on CY Farms, comes over seasonally.

“We’re here most part for the money and working the hours,” he said. “The first day I called for my interview, one of my first questions are the hours?” Van Sdiden said he’s budgeting on a minimum of 60 hours for it to be worth it to come to the United States to work. As a worker, if his hours go lower, then it’s not going to be worth it for him. He’ll go to other places where they can get more than 60 hours.
Alfredo Mejia, whose been working at MY-T Farms since 1996, has been able to send his first son to college and buy a house. If New York cuts hours to 40, he won’t be able to send his second son to college and make the mortgage for his house.

“If you guys cut to 40, maybe I have to find another job so I can make enough money,” he said. “I like to have 60 hours or more.” When those workers go, so will educated and experienced farmworkers, the officials said. State Sen. Rob Ortt, R-North Tonawanda, said farms are the economic engines in local communities, and if they go out of business, the communities by extension suffer.
Posted by G.A.F. at 10:51 AM