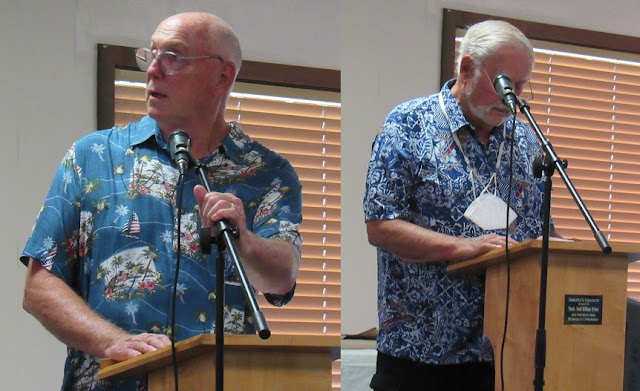 Bill Schaefer and Don Weaver
Former SLI President, Bill Schaefer, asks those gathered, "I bet you're wondering why I'm standing up here, aren't you?" He went on to explain that SLI President Kevin Colburn was off celebrating the birth of a brand new grandson, so Bill was filling in as host for the evening.
Bill called for a moment of silence in memory of Pete Mairs who died July 23, 2021. Bill spoke of Pete's great love for the Silver Lake Institute and its beautiful surroundings. He served long and willingly. Bill then invited Don Weaver to come forward and lead us in the opening prayer of the evening.
Don called for a moment of prayer for Nancy Sellar who broke her hip and received reparative surgery yesterday morning and was then moved to a local rehabilitation facility. Don also called for a moment of silence for the loss of the 12 (now 13) U.S. Marines and 60 (now 90) Afghans who lost their lives to a suicide bomber and spray of weapons firing. Rev. Weaver also prayed grace for the evening's dinner. 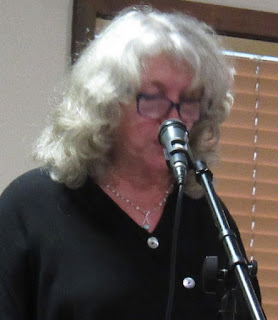 This Silent Hero has been a lifelong Silver Laker, who has participated in many many activities from swim team member and singing in programs as a youth, to leadership roles as an adult. When Pete Mairs wanted to form a Long Range Planning Committee , he asked this trustee to be the Trustee Chairperson. The Committee was  tasked with coming up up with plans for uniform signage for the Institute, reworking and updating the Institute Handbook, organizing a reunion weekend, and finding ways to  recognize the history of the Institute. All of these things were completed thanks to the leadership of this Silent Hero.
First of all,  In order for all of these goals to be achieved, there  had to be a way to fund some of the projects. He came up with the idea to rework the area around the big blue dock by adding a  brick pathway that would allow handicapped residents a safe and efficient way to get from the street to the dock area.  And, engraved   bricks could be  sold to pay for the installation of the brick path.  The success of the idea and sale of more bricks meant that  there was also a way to pay for the large Silver Lake Institute signs on Chapman Ave and at the corner of Perry and Camp Roads. The sales of still more bricks helped pay for the historic markers in Burt Park and at Epworth Hall. Now bricks  are  being sold to fund the installation of  a marker at the site of the old train station.
It should be noted that his contribution went beyond the original conception for the brick project. To help minimize expenses,   He  learned how to remove and replace  the plain bricks in the path and  he personally installed hundreds of engraved bricks— his work is responsible for about 225 of the approximately 300, engraved bricks in the path.
The planned  reunion weekend held in 2014 was a huge success .More than 100 past  Silver Lakers danced at the big blue  dock, shared  a meal at Stoody Hall, attended a concert at Epworth, and generally had  fun reliving the past and visiting with friends and family.
The long term planning committee that he heads found that its assignment to update the handbook  involved harmonizing three different prior versions and redrafting  the bylaws to account for the separation of the Institute from the Upper NY Conference of the United Methodist Church .  It took about four years and many many meetings on His porch before the draft was ready to be submitted  to the Institute trustees for approval.
The source of Bob Cook ‘s dedication is almost certainly EJ Cook, his great great great grandfather,** who was one of the founders of the Silver Lake Assembly. Bob Cook is indeed a Silent Hero who comes from a very long line of Silver Lakers who passionately believe in the importance of the past, present and future of the Silver Lake Institute.  Unquote

Bob spoke up from the audience and said, "Just one great." 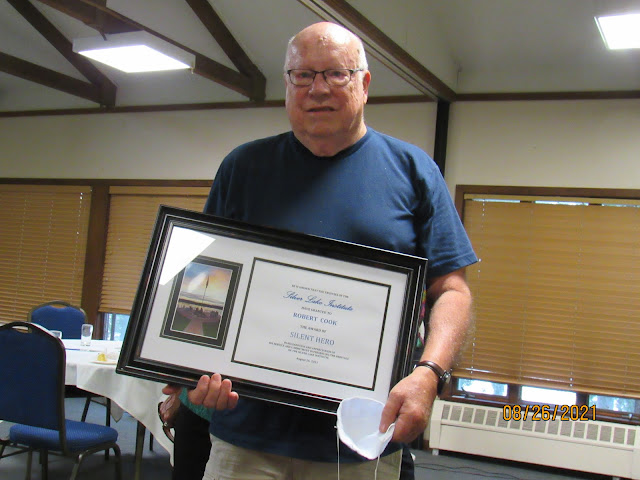 Robert (Bob) Cook
* * *
Julia Hoffner was called forward to give her nomination statement.
"Do everything as though you were serving the Lord, not men. (Ephesians 6:7)."
"My nominee has such a servant's heart. He is always right there with the words, 'What can I do to help?' He has carried tables from building to building, chairs to wherever they are needed, loaded and unloaded cars, help out with committees that he is not a member of (he is always right there to help set up for the program committee) and has done a great job of leading the Spiritual Life Team and getting the Sunday Service venues set up every week (even learning how to set up and use the new sound system). When he sees something that needs to be done, he does it ... such as helping to finish the Hoag rest room, refinishing the doors on Hoag. Cleaning out Hoag so it could be ready for use. He does these things without being asked. He is truly a Silent Hero. He said to me the other day, 'It makes me happy to be able to help.' I say, 'Well done, good and faithful servant ...' My Silent Hero--Larry Beman." 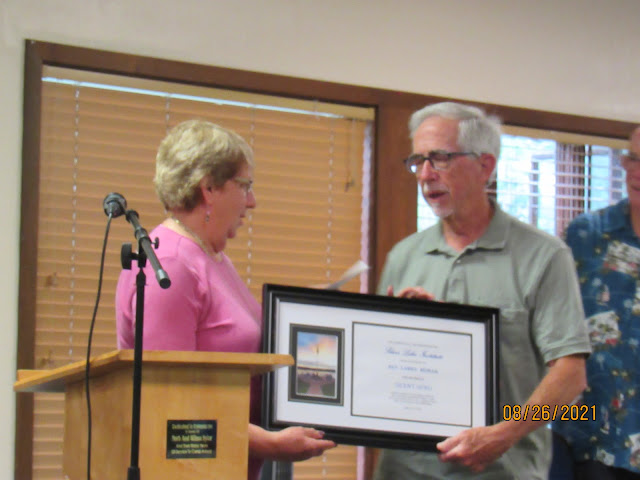 Julie Hoffner and Larry Beeman
It was a great evening, enjoyed by all. Upon leaving Koinonia Inn, we were greeted by a heavy rainfall.
Posted by G.A.F. at 6:42 AM