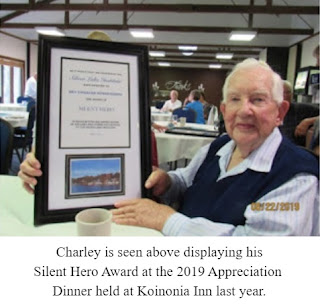 For many years, Charles W. Nonnenberg and his beloved wife, Kay, made their home among prominently positioned cottages on Lakeview Ave. where their magnificent view of Silver Lake was totally unobstructed through a semi-circle of windows taking in every movement of wakes and waves, seagulls, geese, swan, active fish, fishermen, Ice Fishermen, boats, skiers, swim-mers, flares and fireworks--the full panoply of God's natural creations and of Humankind's wild imagination for entertainment. Some sought peace, others wild excitement, and Charlie was constantly aware of it all--observing both the wonder of God and of God's many aspects of creation.

Charles Nonnenberg was far from being only an observer, he lent his gifts and talents to numerous family, friends and acquaintances. Even after retirement from the active itinerant ministry of the United Methodist Church, he rarely turned down an opportunity to serve his God in whatever ways were being asked of him. He continued to serve in pulpits and temporary pastorates and enjoyed the old fashioned hymn sings put on by the North Gainesville United Methodist Church. His one-on-one ministries were powerful and effective and he was always bold to proclaim the faith of his fathers and words of his beloved Scriptures.

Charles even responded to the call of the mission field at home and abroad, bringing a flare for the international among his many traits. Nor was he afraid of electronics utilizing them to bring the message of salvation in fascinating audio-visual presentations of his work and his travels. A serious man, Charlie was also a man of good humor, enjoying a robust laugh at the foibles of the day.

Charlie loved the Silver Lake Institute, its long and faith-filled history among Methodists of Western New York. Following the death of his beloved and bedridden Kay, Charlie worked his tail off on behalf of the Institute. Charlie served as a SLI Trustee, Registrar, Bookkeeper, and handled details much like the SLI Clerk of today. His home, in affect, unofficially became the SLI office. Even a Trustee Board meeting or two was held in his spacious front room overlooking the Lake.
The SLI Separation in 2016 dismayed and saddened him. He was somewhat confused by the Upper NY Conference's request for the separation and quite unhappy about the SLI's decision to allow the State Grant program to insist SLI remove religious services from Epworth Hall.

For Charlie, the real significance of the Silver Lake Institute is to be found in its historical message of faith in Christ which brings, for anyone who believes, a life of power and promise that leads to life eternal. So many lives were changed and directed by experiences in Epworth Hall, he found it difficult to separate the two. He will long be remembered as a man of faith and a man of the Word.

His Memorial Service, officiated by the Reverend Tom Kraft was beautifully personalized by the testimonies of those present who spoke of their memories of Charlie and the many ways their lives were affected by his. The hymns, "In the Garden" and "Blessed Assurance" were accompanied by Julia Hoffner, lifetime member of SLI, serving over 50 years as SLI accompanist. Special Music, "I Can Only Imagine," was sung by Marlene Vullo Martinez. A Poem, "Meditation Before Kaddish #1," was presented by Maryann Sherry. The balance of Charlie's personality was maintained by the congregation gathered singing "I'm a Nut."

Today, July 11th would have been Charlie's 97th birthday. Kris and Glynn Schultz, new owners of Charlie's Lake House, presented 97 carnations for distribution among those present. The family wishes to thank all who helped in the preparations and presentations of the Service and "all who came to remember and celebrate Charlie!"
Posted by G.A.F. at 10:15 PM