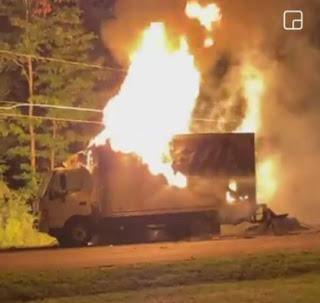 PEMBROKE — Jake Reinhardt and his son, Jim, were each at their South Lake Road homes Saturday evening when the fireworks truck fire and explosions happened. Both seemed to have good views of the truck after the truck came to a stop in front of Jake Reinhardt’s house amid the fire and loud booms coming from the vehicle.
Jim Reinhardt and his girlfriend, Cindy Scapillato, were both in the living room of their home when the fire and explosions happened. “A bunch of fireworks and a bunch of flames,” was the way Jim summed up the incident. They were both sitting on the couch and Scapillato saw what happened through the window on the front door.

“The windows all lit up and shook. The whole house was shaking,” he said. Jim Reinhardt, a Pembroke firefighter, said he was the one who called 9-1-1. He said he was standing on the porch and was on the line with a dispatcher for a few minutes. “9-1-1 asked me what was going on. I told them the vehicle was on fire and there were fireworks going off,” he recalled Wednesday. “They were shooting out the top. There were fireworks all over the place.”
Courtesy Brian Quinn, BataviaNews.com
As they went out the front door, Scapillato was going crazy, Jim Reinhardt said. “I had no idea what it was,” he said. “She was screaming, ‘It’s a car!’ She was running to it. I was screaming, ‘Get back here!’ “We went running over there. I called dispatch back and said, ‘Be advised, it’s a box truck and there are still fireworks going off,’” he said. I’m looking in the front of the truck to see if he (Daniel Miller, the truck’s driver) was still in there. I didn’t want to get too close.”

Scapillato said at first, she thought a house had blown up. “I went into panic mode. Our first thought was to make sure whoever was in the truck was OK,” she said. “After that, I was dumbfounded by the whole thing, actually. Once we got a hold of the truck driver, I just wanted to give him a big hug. That’s all I did, was just give him a big hug, make sure he was OK. He was very shook up.” Scapillato said she and Jim sat on the front porch and watched the response and the cleanup for at least a couple of hours.

“Then, the different videos the next day — it was just amazing — amazing that the gentleman walked away,” she said. Jim Reinhardt said, “I’ll never see fireworks the same way.... We got to bed about 3 in the morning, after they loaded the truck up. The truck was on the flatbed,” he said. “They were cleaning up everything.”
Jake Reinhardt recalled, “When I was sitting in the living room, it scared the hell out of me. It was loud. It shook the windows. I called 9-1-1. I think somebody else called 9-1-1 before me. Then I came out on the porch and watched it.” The Reinhardts each have some debris from the fireworks truck fire and explosions that interrupted a few of the residents’ evenings. There are some small tubes, that had been in the truck, on the ground by Jake’s mailbox.

“It was all over my yard,” he said of the debris. “There was a lot of junk. I just mowed it all over with my mower and cut it up.” The fire and initial explosion happened just up the road from Jake’s house and the truck kept going until it was in front of the house.

“I felt sorry for the guy — lucky he didn’t get hurt,” Jake said of Daniel Miller, the driver of the truck, who was unhurt. Jake Reinhardt said he didn’t know what happened at first. “The first explosion, I was in my living room and this whole side of the yard just lit up,” he said, pointing. ”I didn’t know it was a truck that exploded until it stopped over here (in front of the house).” This happened too close to be anyone shooting off fireworks, he said. No one uses fireworks on South Lake Road.

“They had the fireworks in Akron that night,” he said, noting that’s the show the truck driver was coming from. “I was out here until about 2 o’clock in the morning (Sunday),” he said. Jake said there was a light set up in his driveway to help those who were cleaning up debris on the road. That went on until about 3 or 4 o’clock. Jake Reinhardt finally went to bed about 3 a.m. Sunday. He said later that day, there were people coming around, curious to see the site of the incident. He said no one came onto his property.

He said he’ll never forget what happened Saturday, July 3. “Never — I’ve seen a lot of fireworks, but ...” he said. The Genesee County Sheriff’s Office responded at about 11:45 p.m. Saturday to the area of 8783 S. Lake Rd. Fireworks had been going off near the rear of the truck, the department said.

“The road was heavily covered in debris for approximately 100 yards north of the vehicle,” the reported read. “Firefighters on the scene were working to get the fire under control when residual fireworks in the rear, cargo area of the vehicle began to detonate. Local residents who had exited their homes to observe the fire were instructed to return to their homes as a safety precaution. The vehicle was positioned underneath power lines and a transformer, and flames from the vehicle were near the lines.”

The county Sheriff’s Office said National Grid responded to the scene and determined the fire did not damage the power lines and transformer.