x
It's Official:
The Concert was at the Dock with 107 adults, 18 children; some came by boat 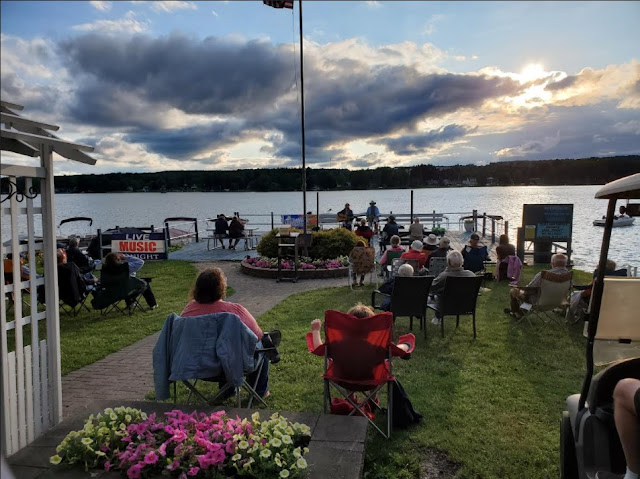 People were left and right of the Dock, more across the street, and even those in boats who stopped to listen.
It was a good night for a first concert with 125 present, especially after last year's Covid hiatus. The Old Hippies, Bill and Kaye McDonald, wrote and performed two songs inspired by the Western New York Covid experience which were humorous and good music. The audience was given three choices of songs which they enjoyed hearing played and sung as encore. 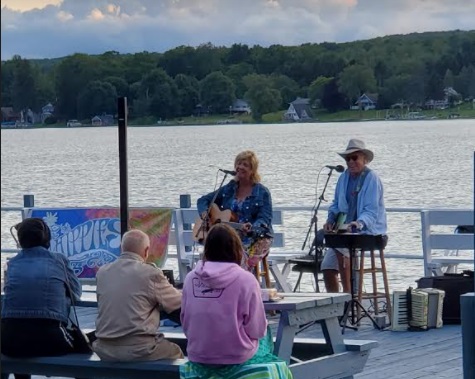 The sun was with us initially for over half of the concert and then clouds began to envelop it. Concert-goers were indeed lucky because not another raindrop fell  during the entire concert including the setup and tear-down times. The Hippies received several well deserved rounds of applause.
Thanks to the SLI Program Team and chair Julie Hoffner who carried out our first concert on the Dock without a hitch. Next week instead of the Friday night concert, there will be a Saturday night Coffee House with the band, Mojo Chunk on the porch of Stoody Hall, corners of Perry Ave., Park Ave. and Embury Ave. across from Burt Park. Watch for the announcement in next week's SLDNewsletter.