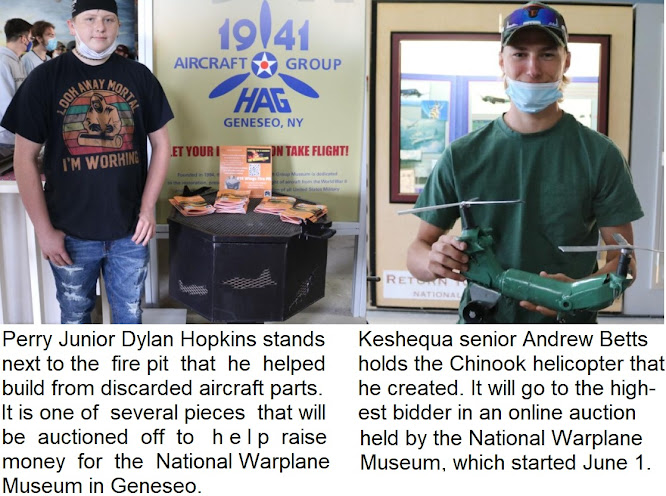 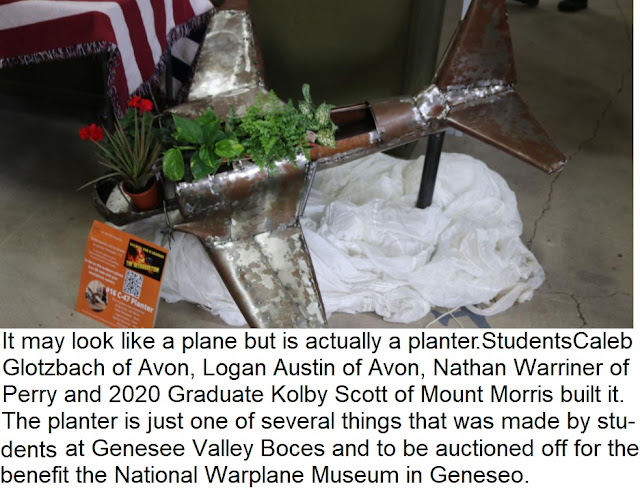 GENESEO — Old and unusable aircraft parts are being given new life at the National Warplane Museum, thanks to a group of Genesee Valley Boces students.

The students have taken what might otherwise be scrap metal and turned the materials into home-made artwork.

“We have accumulated a number of pieces over the years that we did not need or weren’t in a condition to be used on a flyable airplane, so we were happy to go through our storage area to find as many pieces as we could, that they could use,” said Craig Wadsworth, the museum’s volunteer director of maintenance.

With their creativity and welding skills, the students helped to create 24 works of art. They include planes, a mosquito and even a gnome.

“It is a 5-foot-tall gnome, but the top of the gnome is the nosepiece from a plane, and as soon as the student saw that, he said, ‘I am going to make a gnome,’” said Metal Trades Instructor Olie Olson. “Gnomes do not relate to the Warplane Museum but it is a vintage piece, it carries a light and all of the those parts came from old parts of an aircraft.”

The project is something that not only helped unleash the students’ creativity, but aimed to educate them about the museum.

“It is in our backyard and it is a museum that everyone should be able to come, tour and enjoy,” Olson said. “Having vintage parts was an opportunity for my students to have exposure to the museum. Many of them had never been here.”

Keshequa senior Andrew Betts created a twin-rotor Chinook helicopter with his design. It wasn’t something he originally planned on doing and he said that as he worked on the design, his plans changed along the way.

“It was originally just supposed to be a single propeller plane but then we found two pieces and it ended up being a Chinook,” he said. “My older brother is a mechanic in the U.S. Army for the helicopter, so it kind of gave me a little bit more inspiration for that.”

Junior Dylan Hopkins of Perry also admitted having some challenges with his project. He helped to build piece No. 10, which is the winged fire pit.

“We did not have a lot of extra pieces by the time that I had the idea, so I decided to go with just the plain designs on it,” he said. “I had to learn a bit of coding from the computer and after that we had welded all of the pieces together.”

Students Nate LaFaye, Trey Learn and Nathan Smalt also had some fun with their project: The created piece No. 15 which is a large mosquito.

“It was very difficult to weld some of the pieces because of the different thickness of the material but it went together pretty well,” LaFaye said. “We just kind of designed it, as we were putting it together.”

People interested in purchasing the artwork will have a chance to bid on the pieces during an online auction called, “Welding for Warplanes: The Resurrection,” which is ongoing through June 12. All of the money being raised will go to the National Warplane Museum.

“The last year has been a struggle for many organizations including the museum, so to be able to use this as a fundraiser is also very important to our financial survival this year,” Wadsworth said.

The auction’s organizers don’t have a set goal of how much money they would like to raise but say some of it has been earmarked for the engine repair of Whiskey 7, the historic C-47 cargo plane that flew during the D-Day invasion on June 6, 1944.

“We have 50,000 followers on our Facebook, Twitter and Instagram and also have 1,000 active members of the museum, so we are hoping to encourage them by emailing what we are doing, and we are hoping to potentially have people from all over the world see these, be intrigued and be willing to support the kids,” Wadsworth said.

Bidding on the pieces is easier than you might think and only takes a swipe of your phone to get you to the auction site.

“Each of the pictures in the booklet, along with the posters that will accompany the sculpture will have a QR code and they will scan the QR code with their smartphone and it will take them directly to auction website and they will be able bid on that item,” said Volunteer and Historical Interpreter Jodi Beyer.

The auction will take place online through June 12 at https://airauctioneer.com/welding-for-warbirds-the-resurrection.