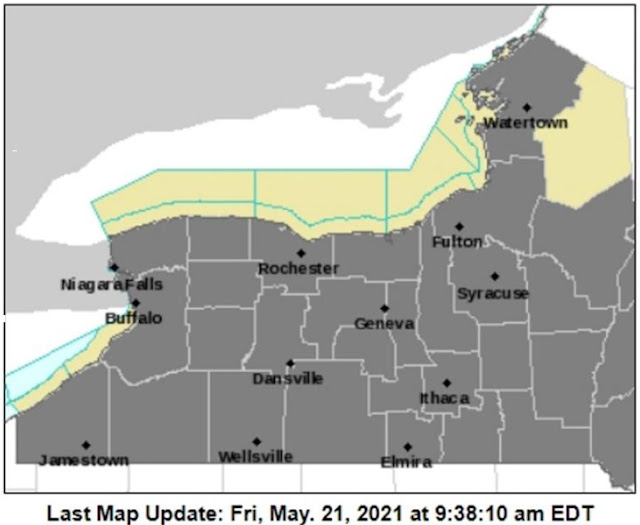 Heat continued today, as did air quality alerts which included the entire GLOW region. It was originally reported that the air quality alert (AQI) would be in affect until next Wednesday, but that was obviously changed to 11 pm tonight (Friday). Air Quality alerts (taken from the Air Quality Index [AQI]) are issued on a one-day basis.
All four GLOW region counties were included in tbe air quality health advisory today that extends from Western New York, across Lake Ontario and through Central New York. The advisory was in effect from 11 a.m. through 11 p.m. due to high levels of ozone.

High pressure was responsible for supporting another day of summer-like temperatures today, the National Weather Service said in a forecast discussion this morning. Most areas reached the mid- to upper-80s with some parts of the GLOW region approaching 90 degrees this afternoon. Local high temperatures for today included: Buffalo - 84.92ºf @3:54 pm. Rochester - 88.0ºf @3 different times during the afternoon. Silver Lake - 88.0° at 4:55 pm Friday.

Record temperatures online had not been updated as of this editing, but even if we did not break records, we came close again today. Dewpoints for the most part remained below 60 degrees F, so the heat index was not a concern, the Weather Service said. An isolated shower or thunderstorm earlier recorded as possible well inland from the lakes this afternoon, did not occur. A better chance for showers and thunderstorms arrives today (Saturday) and Sunday with the passage of a cold front, the Weather Service said.

The state Department of Environmental Conservation and state Department of Health issued air quality health advisories when DEC meteorologists predicted levels of pollution, either ozone or fine particulate matter which was expected to exceed an Air Quality Index value of 100. The AQI was created as an easy way to correlate levels of different pollutants to one scale, with a higher AQI value indicating a greater health concern.

Summer heat can lead to the formation of ground-level ozone, a major component of photochemical smog. Automobile exhaust and out-of-state emission sources are the primary sources of ground-level ozone and are the most serious air pollution problems in the northeast. This surface pollutant should not be confused with the protective layer of ozone in the upper atmosphere.

People, especially young children, those who exercise outdoors, those involved in vigorous outdoor work and those who have respiratory disease (such as asthma) had to limit strenuous outdoor physical activity because ozone levels are the highest (generally afternoon to early evening).

When outdoor levels of ozone are elevated, going indoors will usually reduce your exposure. Individuals experiencing symptoms such as shortness of breath, chest pain or coughing should consider consulting their doctor.

Ozone levels generally decrease at night and can be minimized during daylight hours by curtailment of automobile travel and the use of public transportation where available.

New Yorkers also are urged to take the following energy-saving and pollution-reducing steps:

■ use mass transit or carpool instead of driving, as automobile emissions account for about 60 percent of pollution in our cities;

■ turn off all lights and electrical appliances in unoccupied areas;

■ use fans to circulate air. If air conditioning is necessary, set thermostats at 78 degrees;

■ close the blinds and shades to limit heat build-up and to preserve cooled air;

■ limit use of household appliances. If necessary, run the appliances at off-peak (after 7 p.m.) hours. These would include dishwashers, dryers, pool pumps and water heaters;

■ purchase and install energy efficient lighting and appliances with the Energy Star label; and

■ reduce or eliminate outdoor burning and attempt to minimize indoor sources of PM 2.5 such as smoking. A toll-free Air Quality Hotline (1-800-535-1345) has been established by DEC to keep New Yorkers informed of the latest Air Quality situation.

Additional information on ozone is available at http://www.health.ny.gov/environmental/ outdoors/air/ozone.htm on DOH’s website.                         Updated for Saturday morning by G.A.F.