x
A Fun Snow Because We Knew It Was Leaving:
Springtime snows: Late snowfall breaks records in Buffalo, Rochester

If you’re going to get snow in April, you might as well make it a record amount. The snow received Wednesday in Buffalo and Rochester broke records in both cities, according to the National Weather Service in Buffalo.
Buffalo received 3.1 inches, breaking its previous record of 1.3 inches in 1934, according to the NWS. Rochester received 2.8 inches, with broke a record dating back to 1978. The snows started arriving in the early-morning hours across the GLOW region. Most residents woke up to find a wet, slushy snow covering lawns and trees, while roads remained clear. In a rare turnabout, Orleans County was leading the area’s accumulations as of about 11:30 a.m., according to NWS data.
Snowfall totals at the time included:
■ Genesee County — Batavia, 3.4 inches; Le Roy, 2.9 inches; Stafford, 1.5 inches; Pavilion, 1.2 inches.
■ Livingston County — Mount Morris, 1 inch; Dansville, 0.5 inches; Avon, 0.1 inches.
■ Orleans County — Medina, 3.6 inches; lakeside, 2 inches.
■ Wyoming County — Wyoming, 1.6 inches; Silver Spring, 1.4 inches; Warsaw, 1.3 inches; Portageville, 0.8 inches.
There was a break from snow in the early afternoon, but for Wyoming County the snow activity formed a regular off-and-on snowing pattern almost up through darkness tonight. The snow came in bouts of snow squalls but were limited in time so accumulations remained minimal. The melting continued and left little or no evidence of squalls that diminished visibilities for the same brief periods. Tomorrow begins a warming trend. The 5-day forecast: 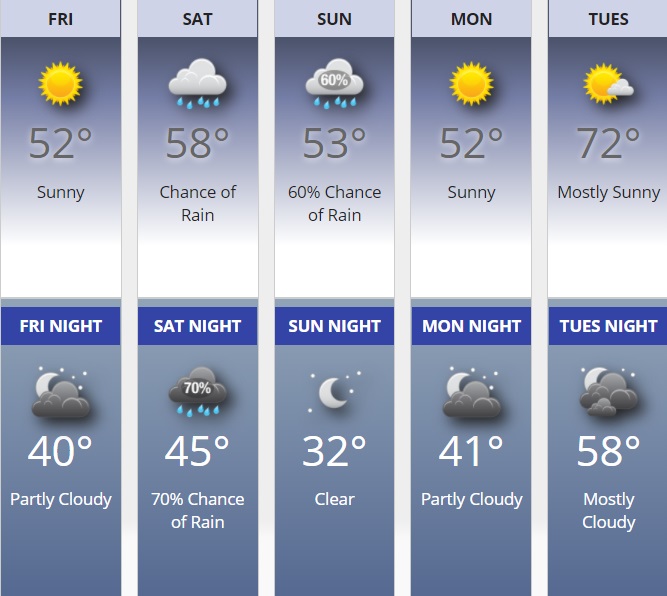