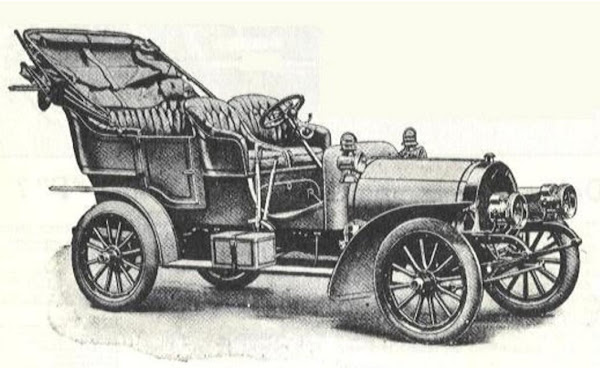 Geneseoans stared as Dr. Jackson from the Dansville Health Spa drove his Klink down Main Street in 1910.
Harold Gilbert was ‘the’ expert on the sole Livingston County produced automobile, the Dansville Klink. He fittingly entitles his two Livingston Museum presentations — “The Short, Troubled Life of the Klink.” Although Webster’s Dictionary offers no encouragement, might the term ‘klinker’ describing an automobile lemon derive from the Klink?

John Klink was a capable mechanic and photographer with Henry Ford-like dreams. His studio was located on the second floor of 126 Main St. The Klink factory later moved nearby on South Main Street in a building originally used to manufacture chairs.

As a serious venture capitalist, Klink first incorporated and then sold 4,000 shares of stock in 1906. These efforts raised a fairly large amount of $400,000 with most of the stockholders living in the Dansville area. Klink Motor Cars Incorporated produced five models in 1907, its first year. Fifteen employees were supervised by Hiram Shaw and John Day, the real mechanical brains of the operation according to Gilbert.

The Klink had at least three strikes against it from the beginning. John Klink advertized only in trade journals although he shipped a 1908 model to New York City for the Grand Central Trade Show. Promotional photos show a sloppy convertible top. It took six weeks to complete one model because most of the parts were ordered in Buffalo, Cleveland, and Detroit. Small castings came from the Sweet Foundry, later Foster-Wheeler. The approximate 20 models produced all had “grabby” clutches. As a luxury car, the Klink could not compete at a high selling price of $2,000 to $2,500. A few years later, shoppers could buy a Ford roadster for $375 at a Mount Morris garage. For luxury, a Mount Morris dealership handled the sleek Chandler 31X, “a new theory in motor construction” for $1,295. Oakland Motors in Tuscarora offered an eight cylinder Buick for $795 in 1916, Oakland accepted a trade of horses for a used car.

Klink’s best year was 1908 when he registered seven sales. Dr. Jackson of the famous health resort became a proud Klinker as did Dr. Kelly of Hornell. Kelly was impressed by two Klinks in the top five during a Hornell hill climbing contest. There was never an order from Geneseo.

As the end drew near in 1910, Klink finally tried popular advertising. Promotional literature hinted he produce his own engines. This was deceptive advertising. The rounded hood of 1908 supposedly would cause great demand. A new model “30” reduced the price to $1,850. Gilbert believes the profit margin then was too small.

The Klink had become a Livingston memory by 1916 when William Feiock and Harry Williams of Mount Morris drove coast to coast in a Ford touring car. A March 1916 newspaper article contains priceless photos of the little Ford crossing the Temecula River and being pulled from quicksand by four horses in the San Louis Rey River, Texas. Even so, Henry Ford had won out.

Today the Klink is long-gone except for three hubcaps, some old manuals, and Harold Gilbert’s love for the car.

David W. Parish is historian for the town and village of Geneseo. He writes “Historic Geneseo” for The Livingston County News. He is a Chancellor Award retiree from Milne Library at SUNY Geneseo and author of 12 reference and history books.
Courtesy of Livingston County News
Posted by G.A.F. at 12:24 PM