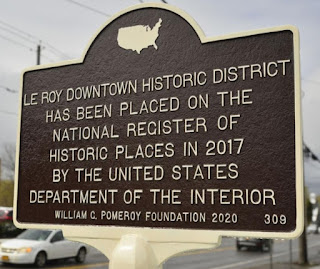 Four years after the village’s downtown was added to the National Register of Historic places, a new historic marker is making it really official. A sign designating the Le Roy Downtown Historic District was erected Tuesday. It’s located on the northeast corner of the village’s main intersection.

The area was put on the National Register in 2017, thanks to a nomination written by Derek King of Preservation Studios in Buffalo and paid for by the Le Roy Downtown Revitalization group. The district is oriented around the intersection of routes 19 and 5, primarily along Main and West Main streets. It also includes several buildings from the cross-streets of Bank, Lake, and Clay Street.

The Le Roy Downtown Historic District consists of the community’s most intact and best examples of commercial, public, religious and social buildings along the route which has served as the primary artery through Le Roy since its founding. The district already has several buildings on the National Register including the US Post Office; the Presbyterian Church; and the Keeney Home between the village hall parking lot and Save A Lot.

Town Historian Lynne Belluscio said the district includes Thomas Tufts’s offices and tavern at 48 West Main St. The structure is the oldest house in the district, constructed in 1811. Generally, the district’s eastern portion contains purpose-built 19th century commercial properties that were sited to take advantage of water power from the Oatka Creek. The western half of the district is more residential in character, although many former houses are now used for commercial purposes. Belluscio said not all the buildings in the district are of historic importance — they are rated on how significant they are.

“Being in a district, a lot of people have misconceptions about it,” she said. “But being in a historic district, that does not save those buildings. It does not prevent you from doing anything you want to the buildings. The buildings can be torn down in a historic district. There is nothing that prevents that. It’s just really a way of saying, ‘Hey this section of our community is noteworthy and of obvious historic significance, both for its history and for its architecture.’”

Le Roy had applied to the Pomeroy Foundation in Syracuse to get the sign cast, and they had received it just before the pandemic shutdown.                          MALLORY DIEFENBACH - mdiefenbach@batavianews.com
Posted by G.A.F. at 6:11 PM