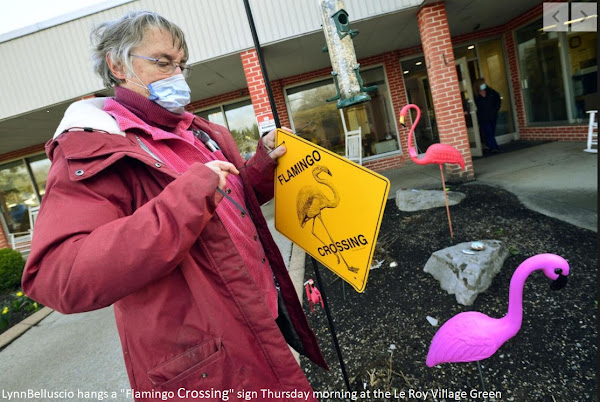 Every April 1, pink flamingos return to Le Roy. The plastic birds have typically swarmed in front of the Le Roy House for the past 30 years, but this year some have migrated to the Le Roy Village Green nursing facility. How did it come about?
Le Roy Historian Lynne Belluscio said she reached out to Sam Vagg, the facility’s administrator, and Katrina Flint, its director of activities, about bringing flamingos over to the nursing home and putting some up by the bird feeders. The nursing home’s staff also decided to wear pink to greet their colorful guests and two gigantic flamingos will be available for a photo-shoot. Belluscio also found flamingo coloring books and made copies of the pages for the residents to color.

“I started writing flamingo stories in the Pennysaver I think it was as early as ’88 or ’89,” Belluscio said. “It was an April Fools’ Day article and basically it was a lot of history of it, but the premise was that on April 1 people in town would look forward to having flamingos return to Le Roy. They would put out decoys to attract the flamingos back. The flamingos would come and feed on the brine shrimp in the creek and all that.”

She said year after year there would be another tall tale, and while it would have some history in it, there was always a flamingo punchline. Such as?

One of the jokes was discussion on why the flamingos didn’t come back — because they flew to Cheektowaga — and the town had owned up to the fact people put a lot of flamingos on the lawns when the Massachusetts company that manufactured the plastic birds closed down. Cheektowaga had hoped the company would move there, and they joked they were going to give tax breaks to people who put flamingos on their lawn.

“Another thing we said was because the local restaurants started serving so much shrimp scampi — I mean it was totally bogus,” Belluscio said. “The thing is people believed my stories.” And now the residents at the Le Roy Village Green can enjoy the birds, too. Vagg said the facility was having a really good day, and staff and residents have been enjoying themselves and the flamingos.
By MALLORY DIEFENBACH - mdiefenbach@batavianews.com
Photo by Mark Gutman
Posted by G.A.F. at 6:31 PM