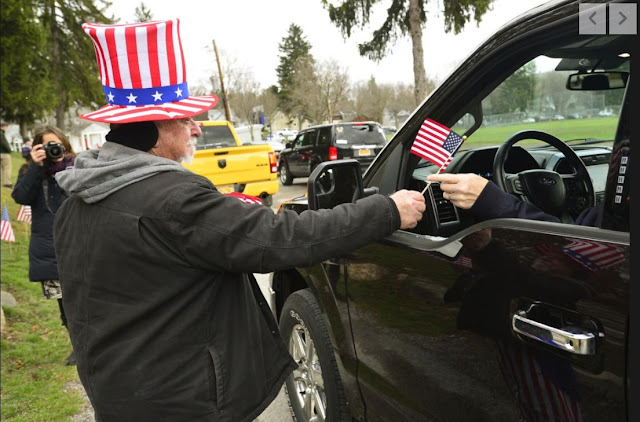 Robin Kruppa, above, greets a pickup truck Monday morning at the Warsaw village park. She shares a quick hug and laugh with the Vietnam veteran behind the wheel, says hello to the guy’s brother, and tells him, “Welcome home.”
“Nobody spit on me this time,” the veteran says good-naturedly.
“Absolutely not,” Kruppa responds. “Never going to happen again.”
Kruppa is the assistant director of Wyoming County Veterans Services. She was among the people who lined the park as a stream of vehicles moved past, containing the veterans, their spouses and friends.
The drive-thru tribute was one of several such ceremonies conducted throughout the area Monday as part of National Vietnam War Veterans Day. The park’s loop was decorated with United States flags and patriotic signs, while an honor guard from area veterans organizations stood by.
It was a far cry from what many of the veterans from the era received, when the Vietnam War and its aftermath were ongoing and highly controversial. Despite their service, the veterans were often treated with anything from indifference to outright hostility from the larger culture.
“It’s cold and we wanted to do something that’s COVID-friendly, instead of driving around and doing a parade,” said Kruppa, who’s an Army veteran herself. “It’s phenomenal,” she said. “They went through so much more than we ever will. Absolutely.”
She greeted Air Force veteran Jack Rase of Warsaw, who’s been highly active in area veterans organizations. He had completed mission planning and pilot charts for missions while based in nearby Thailand during the conflict — serving a wide variety of aircraft from the era including F-4s Phantoms and F-105s Thunderchiefs, which saw much combat.
“It’s 50 years overdue,” Rase said of the recognition. Jody Hager of Varysburg was one of several people manning a table, and handing out free coffee gift certificates and cookies to the Vietnam vets attending.She said her cousin died in the war, and her husband Jeff — a Marine veteran also volunteering at the event — also received some abuse when he got out of the military in 1979 or 1980. People wore their hair longer back then, so recent veterans were easily recognizable with their short hair.
“They deserve it,” she said, asked why she was volunteering for the tribute. “That’s it in a nutshell. They were treated poorly — they were treated very poorly. They deserved the respect and better late than never.”
In Le Roy, Botts Fiorito American Legion Post No. 576 officers and several who served in the Vietnam War gathered near the flagpole at Veteran’s Memorial Park to observe the day which, Legion Commander David Rumsey noted, recognizes the sacrifice veterans and their families made during the war.
“It is a day to honor and give proper recognition to the men and women who returned home from that war and did not receive a proper welcome home,” he read. Rumsey noted the holiday has been celebrated annually since 1973 on either March 29 or 30.
“However, in 2017, the date of the holiday was set as March 29 by then-U.S. President Donald Trump when he signed the Vietnam War Veterans Recognition Act ... This date was chosen because it was this date in 1973 when the last American prisoners of war (POWs) were released and safely returned home, when all combat troops were withdrawn from the war zone,” Rumsey read. “The Vietnam War is known as the most divisive conflict the United States has been a part of.”
Over 2.7 million Americans served during the war, Rumsey told those gathered.
“The Vietnam War severely divided the country, as many were against the United States interfering in the war,” he said. “As such, most veterans returned home without recognition for their sacrifices. We are here today to acknowledge that the sacrifices all Vietnam veterans and their families made is duly recognized and appreciated. We pay tribute to those veterans who made the ultimate sacrifice and honor those veterans that are with us today. Thank you and welcome home.”
Auxiliary Vice President Joan Fernaays said the Vietnam War was the longest conflict in American history.
“Generations later, veterans of this time period are gaining the respect that they had not so freely given up on their return,” she said. Servicemen and women fought in the war over two decades and under five presidents, with 500,000 U.S. personnel having left an incredible mark on Americans, Fernaays added.
The wreath was then placed to honor three servicemen from Le Roy who were killed in the war, making the ultimate sacrifice — Gary Scott, Harry Van Alst and George Fry.
“No greater love hath man than to lay down his life for a friend,” Fernaays said before the placing of the wreath.