“Genesee, Orleans and Wyoming Counties have consistently been left out of the COVID-19 response with delays in testing supplies and now with very limited vaccine allocations,” the letter reads. “All three counties are medically underserved and having a regional clinic with less than a half hour commute would benefit these communities.”

The letter went on to say residents have limited transportation access to Buffalo and Rochester, and that a vaccination clinic at GCC would draw the eastern and western portions of other contiguous counties. The letter also says such a location would be easily accessible from the Thruway. If properly staffed through assistance by the National Guard, the officials said that the GCC clinic would have the capacity of vaccinating more than 2,000 individuals per day.

The letter concludes that “our three counties look forward to working with your office to provide this much needed and more equitable solution to meet the needs of the more rural communities.” Copies of the letter, which may be read below, were also sent Genesee, Orleans and Wyoming Counties state representatives, Assemblyman David DiPietro, Senator Patrick Gallivan, Assemblyman Stephen Hawley, Assemblyman Michael Norris, Senate Minority Leader Robert Ortt, and Senator Edward Rath III.
Letter to Governor Cuomo: 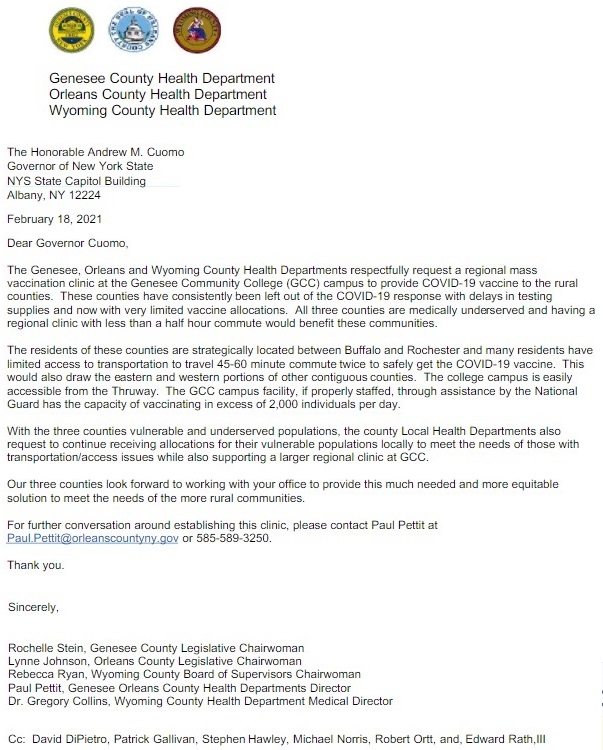