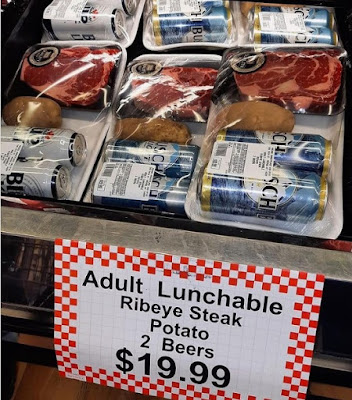 The Arcade Marketplace in Arcade has a pre-packaged meal consisting of meat, potatoes, and beer avail-able for under $20. It's unclear how many varieties of the Adult Lunchables are available at the Arcade Marketplace but we spotted at least two beer varieties (Busch Light and Labatt Blue Light).
The Arcade Marketplace has a cool history. It was originally founded as a meat market in 1920. Founder Lucas Brass' store expanded with a produce and grocery department, before operating under the Super Duper name in 1960, then changing to a Jubilee in 1992.
"In 2002 we made the switch to Olean Wholesale and became Brass' Shurfine. In February of 2019 Olean wholesale was purchased by C&S wholesale which would eventually eliminate the Shurfine name as we would become Arcade Market Place." [Arcade Market Place website] Fun fact about Lunchables: they were invented in 1985 as a way to sell more bologna.
Courtesy, Power 93.7, WBLK
Posted by G.A.F. at 6:53 PM