x
At the 6 pm Hour:
Sparse Snow Flurries Begin to Fly on East Side Water Level, Not Visible Farther up the Hill, Lighted 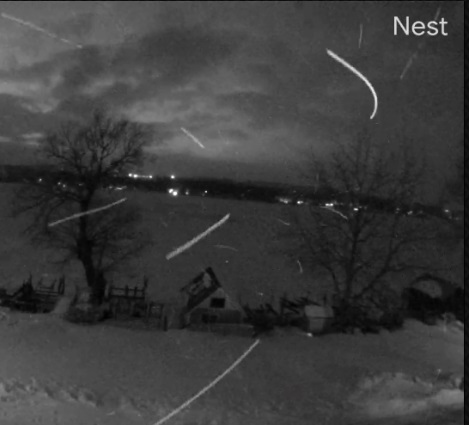 The above east shore camera is a lighted camera which causes even small flurries to become visible on screen. Rain often appears white as the white light is reflected from the shiny wetness of the rain water. The camera speed is set for live streaming which is not a fast speed and is the reason why snow flakes appear as curved lines on the screen--the flurries are moving so much faster than the live streaming speed, so they appear as a blur or curved line. Wind speed and direction in addition to obstacles account for extreme curves or flurries appearing to come from different directions.

This vehicle appears to be a car with its three mandatory back lights lit. They appear as very bright white lights because the twilight is at an advanced stage and near total darkness. This causes the smallest of lights to appear much brighter than they actually are. The lights appear white as opposed to red because the camera is not sensitive to color at night or even shades of white as is obvious between the whiteness of the road cover verses the more angled whiteness of the SLI Green as it tilts down toward the water.
Both Photos Provided from the Streaming Shots, Courtesy of the Silver Lake Institute.
Posted by G.A.F. at 9:22 PM