It took until the middle of January for true Arctic air to arrive in the United States, but despite a late onset of the harshest cold, aquariums and rehabilitation centers across the country have already been busy responding to hundreds of cold-stunned sea turtles.

Cold stuns typically happen when water temperatures drop below 50 degrees Fahrenheit, causing sea turtles to show signs of hypothermia. Experts say this typically happens in enclosed basins such as estuaries since major bodies of water don’t typically cool down that much.

Sea turtles are not able to regulate body temperature, so a sudden cold snap can turn fatal if the animals become lethargic and experience decreased circulation, causing other body functions slow down.

When turtles are cold-stunned, they appear to be dead due to very little movement, if any at all. When they start to warm up and become active, it is an amazing sign for the staff at Gulf World Marine Institute in Panama City, Florida. AccuWeather’s National Reporter Kim Leoffler interviewed the institute's stranding coordinator, Lauren Albrittan, to see how this winter season has affected the cold-blooded reptiles. 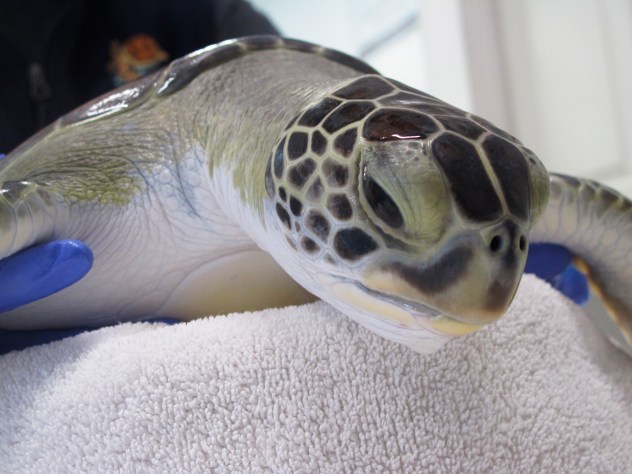 A sea turtle is examined on a table at the Sea Turtle Recovery hospital inside the Turtle Back Zoo in West Orange, N.J. Eleven of the dozen turtles being treated there survived being "cold-stunned" last November when temperatures abruptly plunged, shutting down their internal organs. (AP Photo/Wayne Parry)

“[We have] critically cold-stunned turtles," Albrittan said. "What that means is most likely they have secondary infections or injuries or other illnesses other than just being too cold.”

If the turtles aren’t rescued by an organization like the Gulf World Marine Institute, cold-stunned sea turtles are more likely to be hit by boats, eaten by predators, become sick or die as their bodies shut down, according to the National Atmospheric and Oceanic Administration (NOAA).

“They also can be affected once they are floating or stranded by air and wind. If they do wash ashore overnight and it’s very cold and it’s very windy, that’s going to be more difficult to work with than an animal that does strand but the air isn’t that dramatically cold,” Albrittan said. 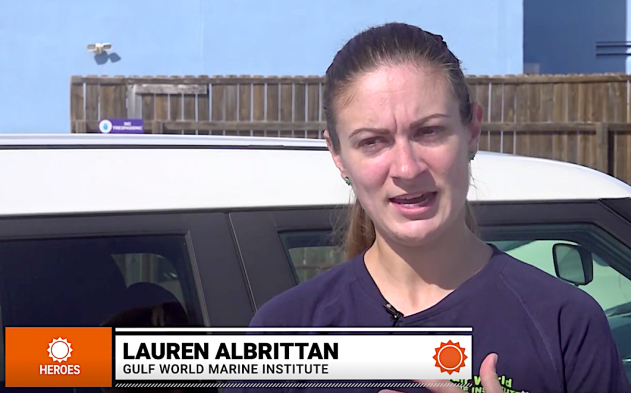 The staff at the Gulf World Marine Institute focuses on getting the turtles to eat and swim normally again so they can be released back into the ocean. For some lucky turtles, recovery can take a few weeks, but for others that are not so lucky, recovery can take more than a year.

According to Leoffler, each turtle has its own space in separated tanks for individualized treatment. In total, the institute is currently treating 38 turtles from the New England area, but they were treating almost double that amount. 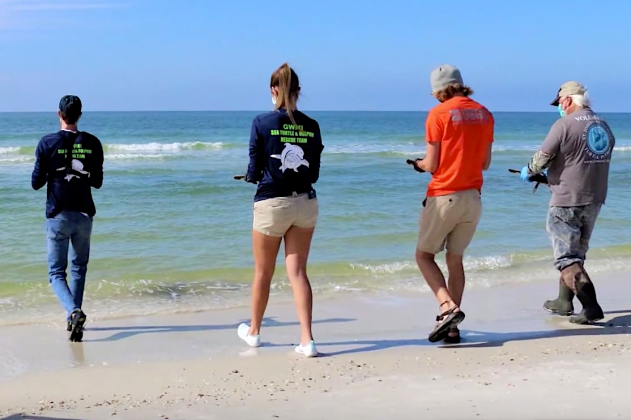 “We received three separate flights of sea turtles from both the New England Aquarium and the National Marine Life Center. We received a total of 69 sea turtles, and we’re fortunate. We’ve been able to release, so far, 20 of them,” Albrittan said.

The turtles were transported to the Gulf World Marine Institute by pilots who volunteer to use their own planes to fly turtles to recovery centers across the county through the organization Turtles Fly Too.

In December, a pilot brought turtles to Panama City and dropped others off in Georgia as well as Mississippi. 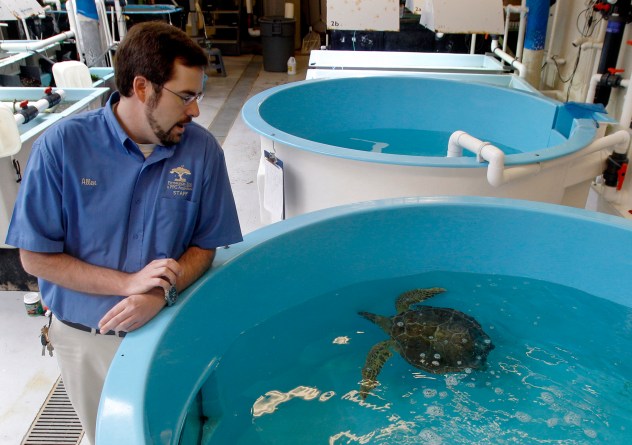 'Peter Pan' swims around in a containment tank where it had been undergoing rehabilitation. (AP Photo/Keith Srakocic)

“The cold-stun effort this year has been extremely difficult, and we knew it going in one because weather patterns indicated that it was going to be duplicative of 2014,” Executive Director of Turtles Fly Too Bonnie Barnes said.

In recent years, NOAA reports, an average of 600 sea turtles have been found cold-stunned along the Cape Cod coast in Massachusetts from late October through December each year. In the winter of 2014, which Barnes mentioned, approximately 1,243 sea turtles washed up on Cape beaches, only 746 of those turtles were alive.

Many times, sea turtles are so weak after floating helplessly for weeks in water too cold for them to function in that many cannot recover.

Turtles can even be cold stunned along the Texas coast, including the Upper Laguna Madre and Corpus Christi Bay, which NOAA says is an excellent habitat for green turtles. However, the Texas coast wasn’t an ideal habitat between December 2017 and January 2018 when more than 3,500 sea turtles, primarily juvenile green turtles, were rescued in the largest cold-stunning event ever recorded in Texas. 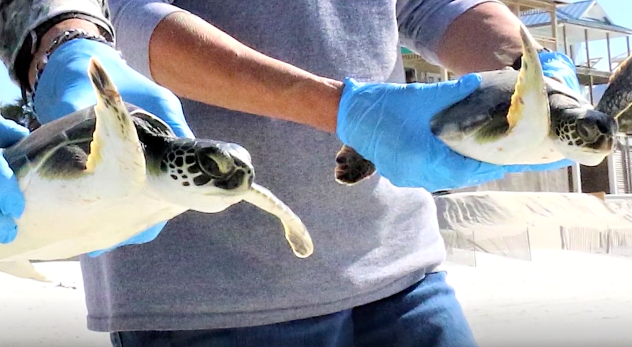 For this winter season, Barnes said the organization has flown in more than 340 turtles.

“It’s really exciting when everybody is so passionate and really wants to help the endangered species movement,” Barnes said.

Experts say that people who live in a coastal area during the winter months can also help these endangered sea creatures by keeping an eye out for cold-stunned sea turtles on beaches and shorelines, by slowing down if traveling by boat and reporting any stranded or injured sea turtles to local sea turtle stranding networks.