President Riles Up Loud Protestor Crowds which then Proceed to, and Breach Capitol Building
Senators and House Members Warned to Shelter in Place. Glass in windows and doors being broken by protestors. Crowds have overwhelmed capitol police. Tear gas employed internally in the capitol building while legislators carry their gas masks. "Chaos in the House Chamber." Swat Units beginning to arrive to re-take the building and to sweep the building and get things under control. 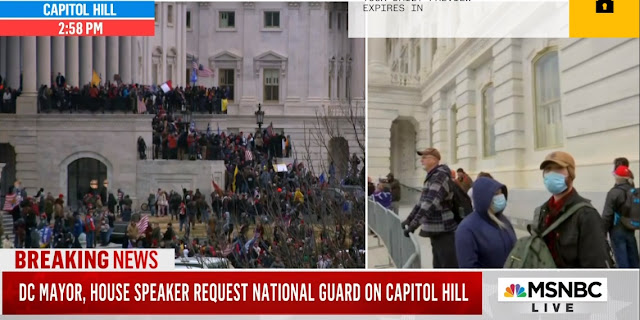 Protestors continue to roam through the capitol halls, Senate chamber, House chambers. Guns are drawn by police. Gun shots heard. Vote count suspended. Calls for immediate impeachment are also heard. Videos of protestors chasing capitol police through the building. One woman confirmed shot in the capitol, in critical condition, and taken to the hospital, died later this afternoon.. Improvised explosive device found inside the Capitol. Virginia sending their National Guard and 200 State Troopers. The Capitol is still "occupied." Police working to clear the "protesters" but they do not appear to be ready to leave. The sun has set and a curfew is in place for 6 pm, although it is clearly being violated. Onegentleman was heard to say on camera, "Next time we're bringing weapons."
Posted by G.A.F. at 2:44 PM