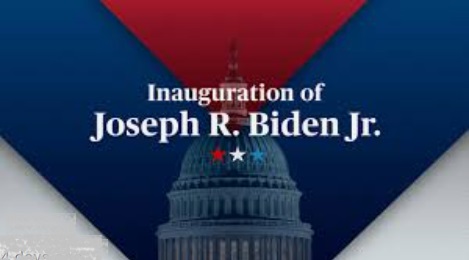 This Wednesday, January 20, will be a historic Inauguration Day — and not only because it will be the first to take place two weeks after a deadly insurrection at the Capitol that was egged on by the conspiracy-laden rhetoric of the departing president. America’s first female vice-president will be sworn in! This inauguration ceremony will have the very first “virtual parade”! Tom Hanks is involved!

Celebrating America, which will air on TV and stream online from 8:30 p.m. to 10 p.m. ET after the inauguration and will feature performances by Bruce Springsteen and Demi Lovato. The inauguration itself will involve performances by Lady Gaga and Jennifer Lopez, so all in all, the mood will be celebratory even if the crowds will be watching from a safe social distance at home. Joe Biden will be sworn in as the 46th president of the United States of America along with Vice-President-elect Kamala Harris in Washington, D.C., at noon ET. Here’s how to watch the Inauguration Day events.

ABC kicks off its Inauguration Day coverage at 7 a.m. ET on Good Morning America, which will be followed by seven full hours of inauguration coverage from 9 a.m. to 4 p.m. ET. ABC will then air The Inauguration of Joseph R. Biden Jr. — An ABC News Special at 8 p.m. ET.

CBS will cover the inauguration from 9 a.m. to 4 p.m. ET and will follow this up with a CBS News Special: One Nation: Indivisible at 8 p.m. ET as a lead-in to Celebrating America at 8:30.

NBC will air six hours of Inauguration Day coverage from 10 a.m. to 4 p.m. ET and will broadcast the Celebrating America prime-time special with remarks from the president and vice-president at 8:30 p.m. ET.

CNN starts its inauguration coverage on Tuesday, January 19, at 4 p.m. ET and doesn’t let up until Thursday, January 21, at 4 a.m.

MSNBC starts its Inauguration Day coverage at 9 a.m. ET and will broadcast Celebrating America at 8:30 p.m. ET. Brian Williams will give in-depth analysis of the day’s events on The 11th Hour at 11 p.m. ET.

BBC World News will have a full day of inauguration coverage from 7 a.m. to 7:30 p.m. ET, including Katty Kay’s President Biden: The Inauguration live presentation from 11 a.m. to 1:30 p.m. ET.

C-SPAN will have live coverage of Inauguration Day on television and C-SPAN Radio beginning at 7 a.m. ET, hosted by Peter Slen and Greta Brawner.

The Roku Channel has a number of free options for inauguration coverage beginning on Tuesday, January 19, at 8 p.m. ET. Platforms on the Roku Channel include ABC News, Cheddar, NBC News NOW, and Newsy.

CBSN has free Inauguration Day coverage beginning at 7 a.m. ET with CBSN AM and running with various anchors throughout the day. At 8:30 p.m. ET, CBSN will simulcast the Celebrating America prime-time special. This will be available on the CBSNews website and through streaming apps on your phone, tablet device, and game console as well as Apple TV and Roku.

Cheddar will offer live Inauguration Day reporting from Capitol Hill from 7 a.m. to 8 p.m. ET on a number of free streaming platforms, including Roku, PlutoTV and Tubi.

If you don’t have any of the above options, Pluto TV has a number of free in-browser livestreaming options with no sign-up required. Its live news channels include Pluto TV News, CBSN, CNN, NBC News NOW, Sky News, Bloomberg Television, and Cheddar.