Teens hailed as heroes after saving kids from icy waters: 'good training'
Rich Heid could only scream as he watched his two young kids hurtle toward a frozen pond. Riding a sled on what was supposed to be a fun day out in the snow, the family’s day outside nearly turned tragic until heroic teenagers jumped into action.  (Photos of the Freshmen boys are included on the next page--follow the link "Read More" below.)
"I started screaming, you know, ‘Jump off! Jump off! Jump off!’” Heid said as he recounted watching his 8-year-old daughter Olivia and her 4-year-old brother RJ skid toward an icy pond at the Beacon Hill Country Club in Atlantic Highlands, New Jersey. According to Good Morning America, this was Olivia and RJ's first time ever sledding. Four-year-old RJ, left, and his eight-year-old sister Olivia, right, were sledding over the weekend when disaster struck. (Photos via Good Morning America) "They were continuing getting more momentum. I realized right there, like, holy crap, they’re going down to that water," Heid said.
According to NJ.com, the family decided to sled on a different hill than the rest of the crowds since the main hill was particularly steep. At this hill, there was a pond to the right of the incline, but mother Stephanie Irlbeck didn’t think it was going to be a problem, since it was far away and at a 90-degree angle from the hill’s bottom. Then disaster struck.
“They landed about 7 feet into it (and) broke through the ice immediately. Because they were on one of the inflatable sleds, it kinda floated for a second,” before taking on water, Irlbeck said. 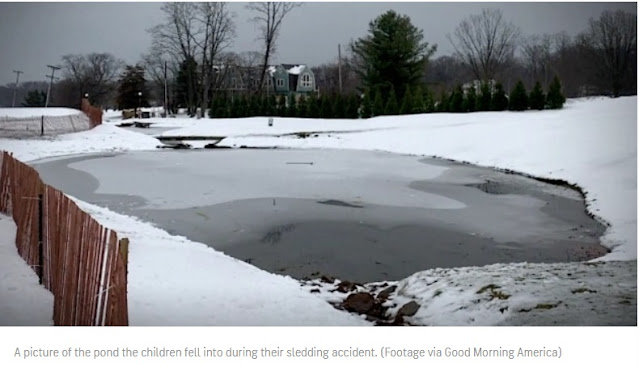 A picture of the pond the children fell into during their sledding accident. (Footage via Good Morning America) 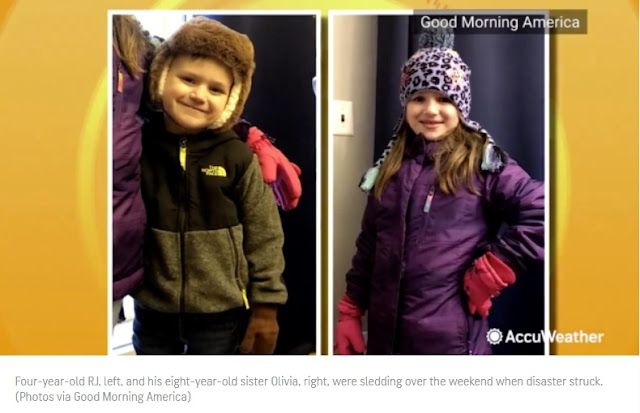 “It was, like, freezing. Our faces were in shock. RJ was, like, really cold,” Olivia Heid said. Then disaster struck.
Temperatures topped out in the low 40s F in Middletown Township, New Jersey, on Thursday, the day the incident took place, but that was after the low had bottomed out in the 20s the night before, leaving the water freezing cold and extremely dangerous. Fourteen-year-old Kiernan Foley was the first boy to jump in the water, and he told CBS New York that they had to move fast once they realized what was happening.
“We definitely had to do something. We can’t just sit there and watch,” he said. 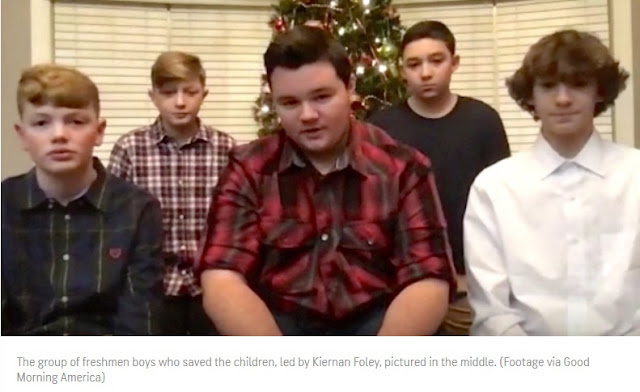 The group of freshmen boys who saved the children, led by Kiernan Foley, pictured in the middle. (Footage via Good Morning America) The boys, all of whom are freshmen at Middletown High School North, said their Boy Scout training prepared them well.
While fellow rescuers Ryan Day and Tyler Armagan tried to downplay the boys' heroics, Irlbeck said otherwise. "Adults wouldn’t do things like that, you know?" Irlbeck said. "Oh my God, this could have been a catastrophic situation."
Posted by G.A.F. at 1:39 PM