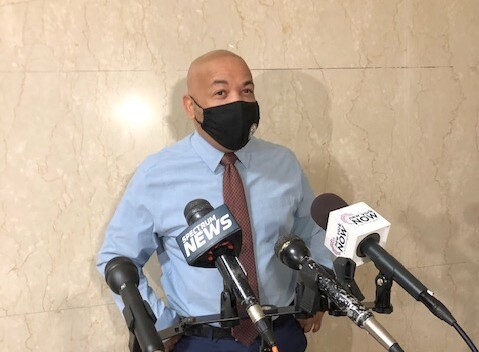 NYS Assembly Speaker Carl Heastie. Photo: Karen DeWitt
Share
Congress, in the relief package approved late Monday, did not include a financial bail out for states hit hard by the pandemic, leaving New York with a multi-billion dollar budget deficit going into the New Year. The leader of the state Assembly says now is the time to push ahead with new taxes on the wealthiest, to start making up for the loss.
The state’s deficit is at least $8 billion dollars, according to Governor Andrew Cuomo’s budget office, though the governor says it could be closer to $15 billion dollars. Assembly Speaker Carl Heastie and the Democrats that he leads in that house have for months now been pushing to enact new taxes on the richest New Yorkers to help make up the shortfall. Supporters argue that the states over 100 billionaires have seen their wealth increase during the pandemic.
“The Assembly …supports raising revenues before the end of the year,” Heastie said. Heastie would like to put in place new, higher, income tax brackets before the year ends so that the state could start closing the gap now. He says he’s concerned that if higher taxes are agreed to in the state budget, which takes effect on April 1, they could be made retroactive to the beginning of 2021. Heastie says the state’s constitution requires that “notice” needs to be given for new taxes, and he wants to prevent any potential legal challenges.
Courtesy of NCPR Journalism

“It’s a legitimate question to have answered,” he said. “I do think there’s a constitutional question.”

There is precedent for new taxes to be collected retroactively. During the last recession, in mid-2009, the state enacted a temporary surcharge on New York’s wealthiest as part of its budget, which took effect at the beginning of that year.

Governor Cuomo says even if new taxes were approved this month, they would not bring in enough money to prevent mass lays offs of front-line workers.

“That means we will lay of people who we need to do the vaccines,” Cuomo said. “Lay off national guard expenses, lay off police, lay off fire people, lay off hospital people, in the middle of a pandemic.”

Cuomo wants to wait before making any decisions on the budget, until after Joe Biden is inaugurated as President on January 20th. Cuomo believes Democrat Biden, who has a history of working with Republicans in the US Senate, may have a better chance of convincing Senate Leader Mitch McConnell to change his mind and agree to authorize federal aid for states and local governments.

“I just hope Joe Biden gets in quickly, and sanity restores to the nation,” Cuomo said.

Heastie says he does not think the federal government, even with a Democrat as President, is going to solve all of the state’s fiscal problems.

“He’s hopeful that Joe Biden, the Biden administration is going to ride in like the cavalry and save the day,” Heastie said.

Heastie says if Democrats do not win two Senate seats in Georgia in a Jan. 5 election, then even the Democratic President might not be able to win a bailout package from a strengthened Senate Republican Majority.

McConnell could continue being the same impediment

that he has been to giving state and local aid,” Heastie said.

Any new tax measures would also need the approval of the state Senate. While over 30 Democratic State Senators, who are in the majority in that house, are on record saying they support additional taxes on the state’s millionaires and billionaires, the Senate has not yet committed to passing anything before the end of 2020.

It’s increasingly likely, though, that both houses may return before December 31st to approve protections for tenants facing eviction and homeowners threatened with foreclosure as a result of pandemic related job losses. 12-27-20; 10:08 am.