AccuWeather meteorologists are alerting snow lovers and those hoping for a white Christmas about the potential for a possible snowstorm in the Northeast around the middle of December. The storm is far from set in stone, but forecasters are recognizing some early signals that a storm could come together and tap enough cold air to produce snow across part of the region during the middle of next week.

Leading up to that potential storm, wild swings in the weather will continue, and one upcoming trend may lull Americans into thinking a fall-like pattern is resuming. A trend toward warmer weather is anticipated this weekend in the Northeast, thanks to a storm expected to take a northerly track through the Midwest and into eastern Canada. 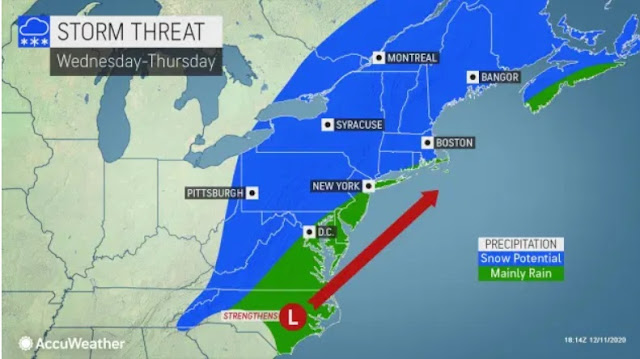 However, as an area of high pressure builds southeastward from central Canada to the Gulf of St. Lawrence region early next week, the air can trend cold enough to cause wintry trouble as that trailing storm approaches at midweek.

One of the ingredients for a potent storm, whether it is likely to trigger a cold rain, snow or a combination, is a high pressure area over southeastern Canada. This weather system can create a bit of an atmospheric traffic jam and provide fresh cold air for any approaching storms, which tend to slow down and strengthen along the Atlantic coast in this type of weather setup. And, when storms slow down, the risk of heavy precipitation increases.

As is often the case with most late-autumn and early-winter storms in the Northeast, the warm waters of the Atlantic Ocean tend to provide ample moisture for storms, but the warm water also creates a problem for snow lovers along much of the Interstate 95 corridor. Often, hopes of an early-season snowstorm melt away as milder air flows in from the sea along the coast. The big cities along the I-95 corridor from Washington, D.C., to Philadelphia, New York City and even Boston all tend to experience this factor early on and sometimes even during the heart of the winter.

"At this early stage, we are just providing a heads-up on a potential storm that could have a major negative impact on travel from rain or snow along the coast and snow across the interior Northeast with the target days being Wednesday and Thursday," AccuWeather Senior Meteorologist Brett Anderson said.

Should the storm evolve and develop to its full potential, the swath of heaviest snow might bring a foot or more of accumulation. The mountains across the interior are typically more likely to get a mid-December snowfall, and any snowfall could have ski resorts in good shape for the upcoming Christmas holiday a little over a week later.